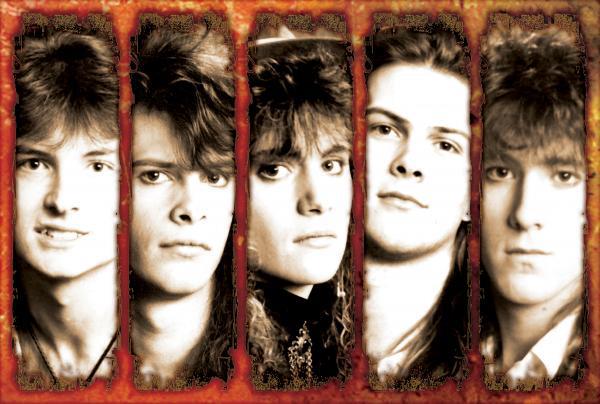 The merging of the messianic message with loud, raucous, rowdy rock ‘n’ roll. To some, this sounds oxymoronic, the mismatched mixing of the sacred with the profane. But to the born-again mousse-abuse mavericks in Legacy–Matt Rice (guitars), John Rice (bass), John Jenkins (drums), Fred Blanchard (guitars), and Doug Meacham (vocals)–it sounded like a match made in, well, Heaven.

The band’s creation began on September 17, 1987, in Reynoldsburg, Ohio. Eric Adams, a youth minister, felt called to build and manage a band that could not only rock your face off, but share the love of God while doing so. With John Rice, Matt Rice, and Matt Reedy already on board, Eric reached out to Fred Blanchard, the younger brother of a friend of his, wondering if he knew of any singers seeking work. As divine providence would have it, Fred’s band had just broken up that day, so he and Doug Meacham were both available to join.

Undecided on a name, the band fluctuated between Xristas, Threshold, and Cross as they strived to learn the songs and mesh their individual talents into one smooth, all-cylinders-cranking metal machine. But before they actually played any gigs, Matt Reedy left the fold and Blanchard enlisted his friend John Jenkins as a replacement. With this infusion of fresh blood also came a new band name–Legacy.

Legacy made no bones about being a Christian metal band. While the music was important, a sizzling salvo of heavy guitars, thunderous rhythms, melodic hooks, and layered harmonies, the band placed equal, if not more, importance on their message, ensuring their lyrics cleaved true to who they were as men of faith.

Claiming Columbus, Ohio as their home and citing bands like Stryper, Dokken, and Scorpions as influences, Legacy launched themselves into the live circuit, playing their first show at Tree of Life Christian School where Fred was still a senior. But the band did not limit themselves to Christian audiences; instead, they took to heart Jesus’ command to take His message into the world and invaded secular venues on a regular basis. One of their biggest accomplishments was winning the Battle of the Bands at the renowned heavy metal club Alrosa Villa in the winter of ‘89, becoming the first white-metal band to ever take the crown in that head-banging competition.

As Legacy rocked out a 20-minute set, a mob rushed the stage and began pummeling their approval in an impromptu mosh pit. Legacy ripped through five songs like a pack of righteously rogue soldiers, feeding off the frenzy in front of them, and exited the stage totally fired up. Only later did they learn that Lefevre had been watching in the wings and told his road manager, “The crowd seems to really like these boys. Why don’t we let them do another song?” Too bad that Legacy, too stoked to sit still, had already left!

Of course, every band has their amusing road stories and Legacy is no exception. En route to a show in Illinois, John engaged in his usual quirk of practicing “air drums” on the steering wheel while listening to some tunes, only this time he was practicing with a pen.Like a scene in some slapstick comedy, the tip went flying off, unbeknownst to John, who didn’t realize what had happened until he had “air drummed” ink all over the roof of the truck, himself, and pretty much everything else in the cabin in one big, black, splatterific mess.

But all was not light and laughter. Back in the 80’s, Christian metal was considered controversial, labeled as blasphemous by conservative believers who lambasted bands for wedding what they deemed “the devil’s music” to the holy gospel. Protesters repeatedly rallied at their shows, spewing their judgmental bullets. But Legacy simply ignored the laments of the extremists and marched on with their mission to rock for the Rock and sound a call to arms to all those metal-loving believers striving to stay strong in a cold, dark, dying world.

Legacy’s star seemed to be on a meteoric rise. They garnered praise wherever they went. They were featured in CCM Magazine and Heaven’s Metal Magazine. Their singles appeared on compilations from Pure Metal and Star Song Records.

They were on the brink of being signed by a major Christian label. But then it all unraveled. Matt left the band to pursue alternate ministries; Fred departed soon after. Within a year, the band experienced a string of personnel pains, and before a new incarnation could be solidified, grunge steam-rolled onto the scene and the radical shift in the musical winds shattered any chance Legacy might have had at wider success. By the spring of ‘92, Doug and John remained the only original members and during a telephone conversation, both agreed Legacy was no more. They had answered the call, danced with destiny, and now it was time to move on.


The members of Legacy remain eternally grateful to God for granting them the opportunity to serve and worship Him through the medium of metal. The band may someday squeeze a small reunion into their busy schedules and possibly even crank out some new music, but regardless of what the future holds for Legacy, their heritage in the Christian metal realm is one they can be proud of.
Facebook Twitter