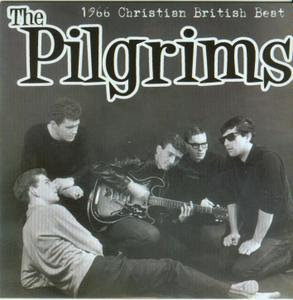 The beginnings of "The Pilgrims" can be traced back to a party in the home of Don Sanders, their lead guitarist. With three of his close teenage friends, he was living it up with with a kind of 'beer, fags [cigarettes] and telly' affair, when on this smoke-filled scene appeared Don's elder brother Robert.

The distinct difference between the two brothers was indicated by the fact that Robert was a Bible College student. The sight of a 'holy joe' prompted Ian Wilkie, a drummer, to suggest jokingly: "Why don't you preach us a sermon?" So Robert did! And what's more, by three o'clock the following morning, he had seen a one hundred per cent response. Each of the guys and their girlfriends trusted Christ as Saviour! Don and Ian thought that Christianity was so great that they had to tell other young people about Jesus.


Wondering how people who never went to church would ever hear   about Jesus, they realised that they could reach others through  Christian pop music. Through Robert, Don and Ian met Derrick  Phillips (rhythm guitarist) and "The Pilgrims" was born with Don,  Ian, Derrick, plus John Hubbard (bass guitarist), who had been with  Don in a rock 'n roll group called "The Neons". John was not a  Christian at the time, and neither was Chris King, who joined the  group as a singer - so the others began to pray for them.

Not only these four guys, but many other Christian friends sent up a barrage of prayer! One night, after playing guitar with "The Pilgrims", John went home and pulled out an old, neglected Bible. Beginning to read the gospel of John, he became increasingly aware of his need. By the time he had reached chapter 7, he put the Bible down and began to pray.

He admitted to God that he was a sinner and, recognising that Jesus had died for his sins, he accepted Him into his life. The group quickly become very popular (despite the fact that many Christians regarded beat bands and Rock 'n Roll as being evil) and they accepted invitations to play at youth groups and churches.

They were one of the top Christian bands for a long time and even played in the presence of Princess Margaret. During the summer of 1964 Chris King left the band and Derrick and John became the main singers, while Don and John swapped roles (John to lead guitar and Don to bass). Later, they were joined by Tony Goodman, a competent blues singer and harmonica player who helped them change to a more R&B music style. Unfortunately, on 20th March 1966, John died of Luekemia.

This was a huge shock and forced the four friends to stop and think what they were doing and why; but not for long... Following John's death, the band received a lot of support and encouragement and were backed by prayer from contacts and supporters all over the country. They felt sure that it was right to continue, but with a more definite focus on secular venues rather than "preaching to the converted". Tony Goodman became lead singer and lead guitarist, Don took up playing the bass guitar and their style became much more rhythm and blues. In August 1967, Derrick left the band and they changed their name to "Out of Darkness", with just Ian, Don and Tony.

Then in the spring of 1969, Don left "Out of Darkness" and Ian became the manager of the band, with only Tony left actually playing in the band and a new line-up of band members. In public, that was the end of "The Pilgrims", but their years together forged lasting friendships and taught them much more than just music.

Their experiences marked them for life and strongly affected their later, though separate, ministries.