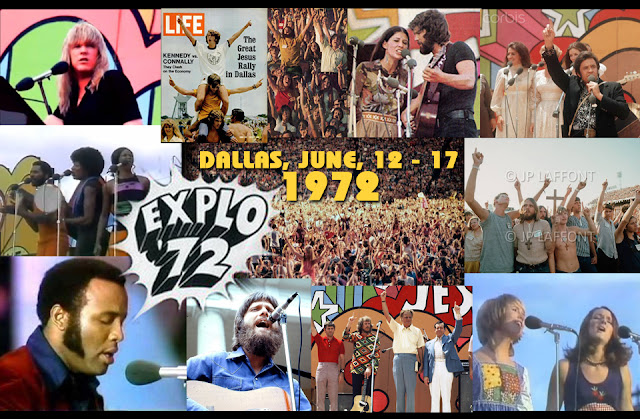 
"Explo '72 was an evangelistic conference sponsored by Campus Crusade for Christ, planned and directed by Paul Eshleman. Explo '72 has been called the most visible event of the 1970s Jesus movement', and came to be associated with the same, even though its primary attendees were not directly involved in that movement.It was held in various locations in Dallas, Texas from June 12 to June 17, 1972, with a nightly gathering in the Cotton Bowl. Its goal was to gather 100,000 high school and college students together to train them in personal evangelism, with a vision toward world evangelism, and to encourage attendees to seek some form of Christian service career.


"""Background""":Attendance at the conference was estimated at 80,000, with about 95% from a white background, fewer than 3000 black attendees, and an international representation of 75 countries. Most of these were middle class high school and college students.The daily schedule included evangelism classes and seminars in the daytime, with hands-on exercises in the afternoon. Nightly events at Cotton Bowl features bands, well known preachers, and pro players from various sporting teams.Billy Graham spoke on six different occasions during the event including the final event which was a public, eight-hour long, Christian music festival on Saturday, June 17, 1972.

Dubbed "The Christian Woodstock", the event drew an estimated attendance between 100,000 to 200,000. Newsweek described the crowds as being "militant Christians."Featured artists were Love Song, Larry Norman, Randy Matthews, The Archers, Children of the Day, Johnny Cash, and Kris Kristofferson. The festival was held on a huge open swath of land just north of downtown Dallas that had been cleared for construction of the Woodall Rodgers Freeway. The excavation for this highway linking Interstate 35 and US75 would forever obliterate the festival site.Many conservative Christian groups were critical of Explo '72 for its ecumenical involvement with both Protestant and Roman Catholic ministries, and for its use of rock music.

The event attracted Jesus movement fringe groups, including the Children of God and the Christian World Liberation Front.

"""Impact""": The long-term impact of Explo '72 cannot be measured. The most obvious and lasting effect was the influence of Jesus music, which would later be more commonly called Contemporary Christian Music. At least one critic credits the event with spawning the entire Christian music industry.
Maynard Pittendreigh, who attended the event as a recent high school graduate, did a limited study when working on his Master of Divinity degree in which he analyzed the long-term effects of large scale evangelistic events. Gathering information from churches from South Carolina that had sent youth groups to the event, he was able to demonstrate that more than 60% of those participants had entered the ordained ministry, were engaged in theological training, or had become missionaries.David Scott, writing for the May, 2005, edition of Christianity Today, documented the effects Explo '72 had on Pope John Paul II. As a cardinal in Poland, the future Pope was heavily influenced toward evangelistic efforts by Joe Losiak, a Polish American student who had attended Explo '72 and introduced its concepts to Roman Catholic officials in Poland.

Bob Horner tells how he and the rest of Crusade were asked by Bill Bright to do something that had never in history been done before. And that something became known as Explo '72.