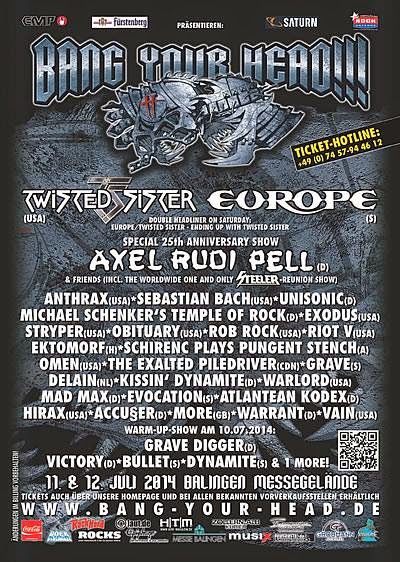 Stryper, MAd Max and Rob Rock, will be in the "Bang your Head" festival that will be held 11 and July 12 of this year.

First held in 1996, the BANG YOUR HEAD!!! has grown to become one of  the most prominent metal festivals in central Germany, drawing an audience of thousands from all over the world.

It all started with a one-day indoor event in the Stefan-Hartmann-Halle in Tübingen. Three years later, the 1999 edition of the BANG YOUR HEAD!!! was the first one of many to folow to be held as a two-day open air festival. 18.000 people joined the shows of an overall of 17 bands including renowned acts like W.A.S.P., DIO, MOTÖRHEAD or rock veterans DEEP PURPLE.

This year will be presented a second time "Rob Rock", who had already participated in this festival in 2003, and for the first time participate "Stryper" and the band of that country "Mad Max".

The festival is headlined by "Twisted Sister, Europe and Axel Rudi Pell." Among others classical, secular bands, also are included, Anthrax, Warrant, Sebastian Bach, Exodus, Warlord and many bands of the new era of metal.