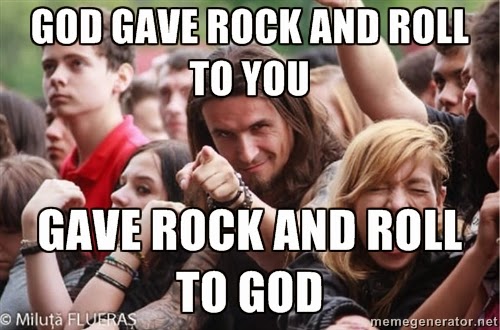 "God Gave Rock'n'Roll To You" is a original song from the group Argent of 1973. The song has been covered by numerous artists, including Petra, Midtown, The Truth, Bride, Oficina G3 and Kiss.


In the credits listed as authored by Russ Ballard. It was recorded in 1971 during sessions for his album "All Together Now", but originally did not appear as an album track to In Deep, 1973, and was released as a hit single at the time. In he CD reissue of All Together Now 1997 is included as a bonus track.


Ballard began his career as a guitarist of the band "Buster Meikle" & "The Day Breakers" in 1961, alongside his older brother Roy Ballard on piano and Bob Henrit on drums. After a period together with the group "The Roulettes" with Adam Faith, he joined the group "Unit 4 + 2", in the early '60s. He later became the lead singer and guitarist of the band Argent, where he earned his first hit, God Gave Rock and Roll to You!

The band Petra first released a cover version of the song in their 1977 album Come and Join Us and re-released a somewhat updated version in their 1984 album Beat the System which sounds much more like the version from the film.

Later, Dennis Greaves & Truth of England, released a cover of this song in 1989.


It was the last Kiss song to feature longtime drummer Eric Carr before his death in 1991. Although he was too ill to play drums on the track, he is featured on backing vocals during the a cappella break, singing the repeated line "...to everyone, he gave his song to be sung", as well as performing drums during the video for the song, but the drums in the study was executed by Eric Singer.

The video was filmed in Los Angeles, California in July 1991 and was directed by Mark Rezyka. It features the band playing in a room with flashbacks of Simmons and Stanley during the make-up era of Kiss's heyday. There were no prominent clips of Carr during the make-up years featured in the video, even though he was a part of that era for three-and-a-half-years.

During the Kissology Volume Two: 1978-1991 special aired on VH1 classic, Gene Simmons has stated that,"It's not just a cover song for a soundtrack, but a testament to Eric Carr, and I think a lot of people don't realize that."

In 1993, Bride, released as the single, the song was performed alongside singers Hip-hop "DOC", also a videoclp of this song was filmed.

Oficina G3 is a Brazilian Christian rock band from São Paulo. Released a cover of this song in 2010.