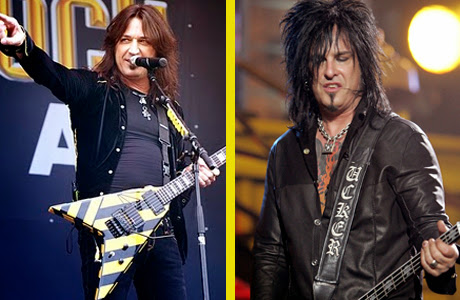 Bassist of Mötley Crüe "Nikki Six" is shown annoying after Michael Sweet, Stryper vocalist, questioned in an interview with "Music enthusiast magazine" about the veracity of many of the things that were written in autobiography Motley Crue "The Dirt", referring to many of the things from book as "B.S.".

Sixx in turn accuse Michael of "No-Addict" who is trying to sell his upcoming book, when Michael Sweet of Stryper questioned the veracity of many of the things from debauchery of Motley Crue in his autobiography "The Dirt"

Sweet — who is out promoting his own upcoming book, ‘Honestly: My Life And Stryper Revealed’ warned fans not to expect a Crue-style tell-all, laughing,

“I think half of what we hear about Mötley Crüe is B.S. anyway, like when you hear stories about Nikki Sixx dying three times and whatnot.

It’s like, ‘how stretched is that?’ … Nothing against Nikki Sixx. Half of the stuff I read in these autobiographies I just kind of roll my eyes at, because I just think that a lot of these guys just did so many drugs and drank so much booze that their minds aren’t too clear in terms of remembering the past exactly as it went down.

I hope that doesn’t come across as me being a jerk, but…you’re probably not going to find in my book what you might find in a Mötley Crüe book, and that’s a good thing!”

Sixx used his Facebook page to deliver his response on May 6, posting a short note that reads: “Non addicts talking s— about people who have fought for their live’s to beat their addiction…..‪#‎MichaelSweet #‎OhHeHasABookForSale ‬#‎GodBlessTheChildrenOfTheBeast ‬‪#‎SobrietyRocks‬ ‪#‎Sad‬”
Facebook Twitter