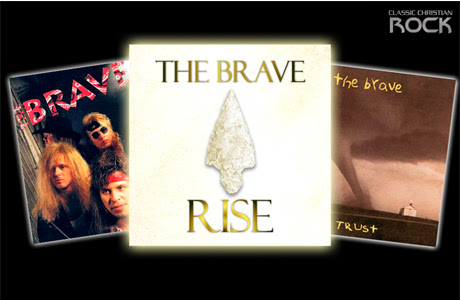 Yes, The Brave is back. In the 90s they released two albums with Pakaderm / Word Records, under the high standards of production of John and Dino Elefante. The same people who released the classics "All toguether Now" "Just A Man" and "Running All My Life" are back with a new album.

His first album, Battle Cries in 1991, is a truly classic album, and yielded over 6 top ten CCM singles.  Also remains in the position # 95 of the Top 100 Christian Metal albums of all time, by HM MAgazine.

In 1994 they released their second album "Trust" where Randy Roberts, he became the vocalist, later, the band disintegrated. Unfortunately, in 2007, Randy Roberts, passed away. Your Brother Stayce Roberts, who was one of the guitarists of the group, along with the rest of the band decided to do a concert in tribute toRandy Roberts.

The Next 19 August, will be the release of their album "Rise" contains 12 Tracks, and you can order right through your web site www.thebravemusic.com, also can keep up with more news about "The Brave" In Facebook and Twitter.
Facebook Twitter