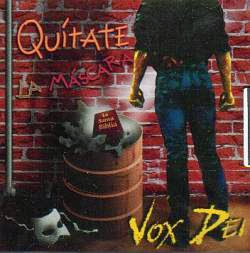 This is one of the best Covers I've heard in my life. In fact, this version is much better than the original song. This song was written by Glenn Kaiser, and was published in 1981 in the album "Mommy Do not Love Anymore Daddddy" from Resurrection band.

In 1990, Vox dei a Christian rock band from Guatemala, released his own version of this song on their first album "Quitate la Mascara (Take off the Mask), in my case, I like more the version of Vox Dei.

Vox Dei, is considered the best Spanish christian rock band in the world. Remember the Christian metal revolution in the 80s headed by Stryper? Well, Vox Dei did something very similar in Christian rock in Latin America, is worth listening to the albums of this band... is a band really classic, which has been an influence in most rock bands Christian in Latin America today.