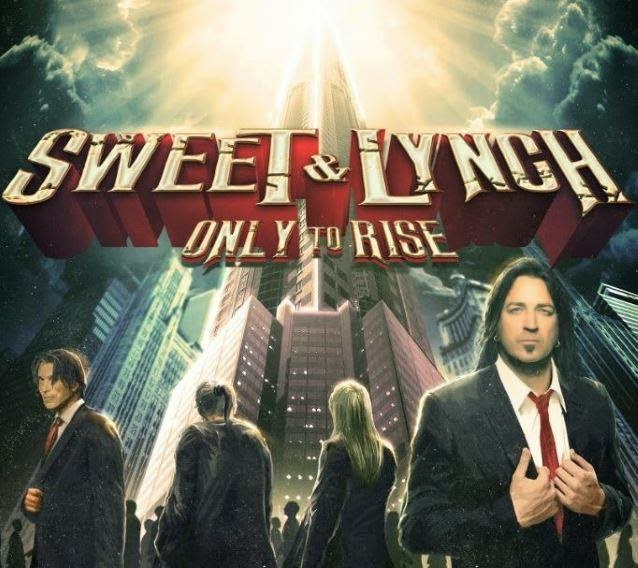 "Only To Rise" track listing:
01. The Wish
02. Dying Rose
03. Love Stays
04. Time Will Tell
05. Rescue Me
06. Me Without You
07. Recover
08. Divine
09. September
10. Strength In Numbers
11. Hero-Zero
12. Only To Rise
An EPK (Electronic Press Kit) for "Only To Rise" is available below.
The song "Divine" can be streamed at PledgeMusic.com.
Sweet told Guitar International about SWEET & LYNCH: "It was the brainchild of Serafino Perugino at Frontiers Records. He asked me to basically sing on this record and then I suggested producing it. I co-wrote the songs with George. I called Brian Tichy and James Lomenzo to put the band together. It's an incredible combination of classic '70s and '80s. You will hear some flavors of JOURNEY, BAD COMPANY, DOKKEN, VAN HALEN and STRYPER."
He added: "I love this CD. I'm super excited for people to hear this CD. I'm so proud of it. James and Brian are amazing musicians. They tore it up. The drums and bass are just as impressive as the guitars. Everybody really delivered… The musicianship level on this is top notch. It sounds as if we were all in the stuff playing together and we were not. Basically, George wrote some riffs about a minute to a minute and a half long. I wrote lyrics and melodies then arranged them. I cut and pasted them together in the studio. Then Brian and James came out and tracked the drums and bass, as well as some rhythm stuff. We then sent it to George to add the guitars."
Asked if there will be any live dates in support of the album, Sweet said: "We are one million percent sure there will be a tour."
EPK (Electronic Press Kit):