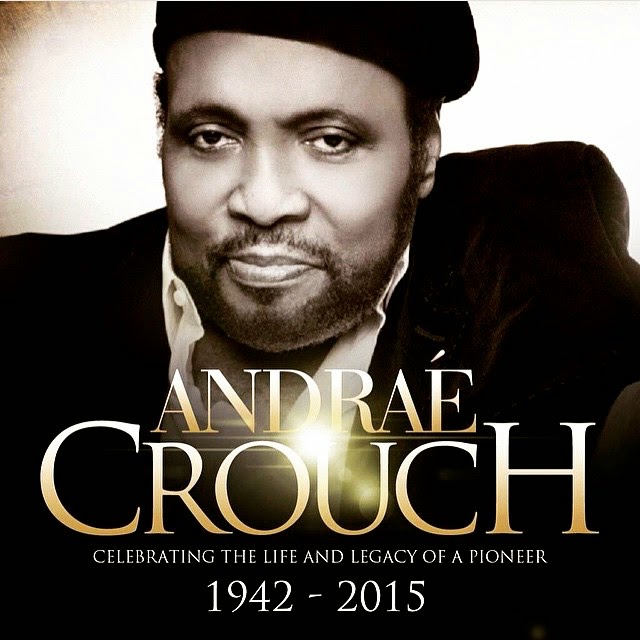 “Today my twin brother, womb-mate and best friend went home to be with the Lord,” said Pastor Sandra Crouch. “Please keep me, my family and our church family in your prayers. I tried to keep him here but God loved him best. Details of Andraé’s Celebration Service and Tribute will be forthcoming.” 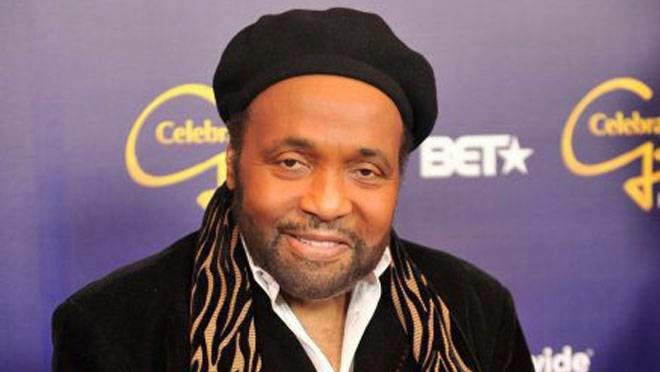 • Some Christian artists have written in their social networks

Sandra Crouch: Today my twin brother, womb-mate and best friend went home to be with the Lord. Please keep me, my family and our church family in your prayers. I tried to keep him here but God loved him best.

Bebe & Cece Winans: Words cannot express how much we are feeling the loss of our dear friend Andre Crouch. We hold his family and loves ones in our prayers and so many great memories in our hearts. May he rest in paradise.

Sandy Patty: In honor and memory of the amazing Andrae' Crouch. Enjoy Sandi’s beautiful rendition of My Tribute from her "Songs For The Journey" album. Please lift Andrae’s family in prayer during this sad time. Be Blessed

Kim Boyce: I LOVE Andre Crouch and his music. One of the highlights of my career was meeting him and his saying, "Boyce, I've never met you, but I've always liked your music!"

Michael W. Smith: My dear friend Andrae Crouch changed my life when I was a teenager. Soon and very soon came too early. Will miss you!

Christine D' Clario: A life dedicated to changing the world through worship is now worshiping God face to face in our heavenly home. One of the first songs I ever learned to worship with was with "My Tribute" (To God Be the Glory) by Andraé Crouch, who went to be with the Lord today. Thank you God for giving this man as a gift to our generation, and thank you for carrying him home after a life well-lived for You.

Brian Duncan: I remember a time back in 85.... I went to California with a good friend who knew Andre Crouch.. we were trying to get a pub deal out there ... Andre graciously let us stay in his Woodland Hills house for a few days.. I remember sleeping on a brown leather sofa in his office...on the walls were pictures taken of him with presidents, spiritual leaders from different countries, famous actors...etc. I remember him cooking a big Italian dinner for us one night around midnight...we played I song I wrote on his stereo, and he was dancing and singing the song back to me...I'll never forget that experience. This man certainly touched the world with his music, and yet he made me feel like I was the most important person in the world that might...Thanks Andre for your contribution to bringing the Gospel to the world.

Darrell Mansfield: I asked Andre once hey how many grammy awards have you won ? And he said Darrell I don't know man but you know those statues aren't even gold or even gold plated man ! Next time I get a grammy I'm gonna say ''Give me the gold and give God the glory'' cause ''God don't need the gold I don't need the glory''
Well precious Brother you got something much better than a Grammy its time receive your ''REWARD'' !!! Yes ....Oh Its Jesus Psalm 23

Nancy Honeytree Miller: Heaven's choir just kicked it up a notch! Andrae Crouch arrived yesterday. What an impact he had on the world through his anointed songs.
Paul Craig Paino please share the story of how you and Andrae passed out Honeytree albums at the Christian Booksellers Convention (was that in 1973 or 4?) which resulted in my being signed by Billy Ray Hearn of Myrrh Records.

This is an awesome remembrance of Andrae Crouch - details I did not realize until today. I knew that he had given copies my first album to people at a Christian Booksellers Convention but Paul Craig Paino told me the whole story today. What a huge blessing. This would have been in 1973 or 4. Paul also mentions Billy Ray Hearn of Myrrh/Word Records and Paul Baker, the DJ who played by songs in Texas.
Actually, Nancy, Andrae came to Ft. Wayne for a concert @ the Church. We then flew to Dallas for the CBC. You and I agreed to take a tithe of the albums and give them away. So, I had an armload with me on the trip.
As it turned out, Andrae had an interview @ the contemporary radio station and he asked me to go along. Of course, I carried one of the albums with me. When Andrae saw it he said to the disc jockey, "You can interview me, but I want you to play cuts from Honeytree's album."...which he did.
We had sent an album to Billy Ray and it was in a stack on his desk. The disc jockey was in Billy's office....saw the album...pulled it out of the stack...said to Billy that he had played several cuts on the radio and got a tremendous response...which prompted a call from Billy...and your recording contract.

So, the Lord used Andrae's unselfish heart to open the door the Lord had prepared for your ministry. Thank you, Andrae!

The Simple Truth (70s group):   Andrae Crouch is gone now but not to be forgotten. Loved this man and his warm heart and showmanship. We will never forget his boundless energy as he danced across the stage to the lightening tambourine work of his sister Sandra. We had the opportunity to meet him in his hotel room at the Muehlebach in Kansas City. We had opened concerts for him twice while performing with our band Simple Truth. One concert was at the Evangel Temple near the Plaza and two years later when he performed at the Municipal Auditorium. It was a privilege to get to know him a bit as he relaxed after the Auditorium concert. His talent and presence will be greatly missed here, but he will be a wonderful addition to that heavenly choir! Can we get an Amen?!
Some of his powerful songs:
The Blood Will Never Lose Its Power
Soon and Very Soon
I Don't Know Why Jesus Loved Me
I'm Gonna Keep On Singin'
I've Got Confidence
My Tribute (To God Be The Glory)

Randy Stonehill: One of the greatest compliments in the entire history of my career was the night Andrae' Crouch marched up to me after a concert we had done in San Diego, California (sometime in the mid-80s). He sounded almost urgent as he got "all up in my grill" and exclaimed "Man, you got to do a live album! Those people love you!"

On January 8th, Andrae' joined the long heavenly parade of brothers and fellow musicians that I've had to say good-bye to over the past several years. I didn't know him well, but count him as a friend, because he was always gracious and candid with me. We first met around 1971 at the Wayne Coombs Agency in Hollywood. Wayne's company handled concert bookings for Christian artists and Larry Norman and I were considering them for possible representation. I'm not sure exactly why Andrae' was there that evening...perhaps as an example of what the agency was doing with new, upcoming talent. But the vision is etched in my memory; here was this handsome young man in a bright red sweater, with a bright shining smile. He just exuded confidence and Godly joy. I thought to myself, "Boy, this guy is sure going somewhere great!"

Throughout the years, our paths crossed from time to time along the concert trail. I'll always treasure the rare gift of sharing a dressing room with him when we were co-billed in Valencia, CA. We did four shows a day for a full week at the Magic Mountain Theme Park. He'd come off stage and grab a towel to wipe the perspiration from his face and chest. As we'd sit together back stage, he'd start speaking, almost in "stream of consciousness" mode, pontificating about life and performance philosophy. I sensed that I was in the presence of greatness and eagerly gleaned as much as I could from the little gems of his hard-won wisdom.

In 2013, I signed on as part of the One-Way Experience Tour. We were planning to play 36 cities throughout that year. I was delighted when I saw Andrae's name on the roster. I thought, "I'd do this tour just for the backstage laughter and road stories alone!" The tour coordinators had heart and vision, but they weren't quite able to pull all of the essential elements together. That May, much to everyone's disappointment, the tour was postponed indefinitely.

I saw Andrae' for the last time at a dinner party in Nashville. We'd all gathered with the tour team to pray and celebrate the upcoming ministry adventure. I had heard that Andrae' was struggling with health issues and, though he looked frail, he still had the unmistakable Light of the Spirit in his eyes. That night, as he was leaving, I stopped him at the restaurant door and we stood together for a quick picture. I'm so glad I did. I had no idea that it would be our last.
So long for now my friend. We'll sing to the Lord together again someday. I love you Andrae'.

John Fisher: Out of the ashes of the Civil Rights struggle of the 1960s and the Vietnam conflict of the same era came the song of a healer. Someone who would bridge black and white with the healing touch of new music based on the unifying force of the gospel of Jesus Christ. He was a soldier of another kind who fought the battles of spiritual warfare, and the physical battles of cancer and dyslexia, until he finally expired into the arms of his Savior yesterday at the age of 72. Andrae Crouch, a soldier who brought his music to the world at the same time Tim was fighting an enemy he couldn’t see, has fallen, and today we, along with many, celebrate his life and his many gifts to us.

When you think that the political and social unrest of the ‘60s was in full force when Andrae Crouch first showed up on the scene (Andrae Crouch and the Disciples were formed in 1965) you realize how timely was this: God’s gift to the world. The same year Tim lost his whole platoon in Vietnam, Andrae recorded his first album, “Take the Message Everywhere.” This was no coincidence. While it seemed like the world was falling apart, God was telling us, through Andrae, that He was still here and still in control.

Andrae sang gospel. He sang about Jesus and what He had done for us on the cross. He sang of nothing else. He sang about how “The Blood Will Never Lose Its Power,” how “Jesus is the Answer” for the current problems of the world, how that “Through It All” he learned to trust in Jesus, and how he was going to see the King “Soon and Very Soon.” Andrae helped start the Jesus Movement and kept on singing about Jesus right up until his passing yesterday. He kept us on track.

Through it all, Andrae wants to keep on singin’, and we are sure that’s what he is doing right now.