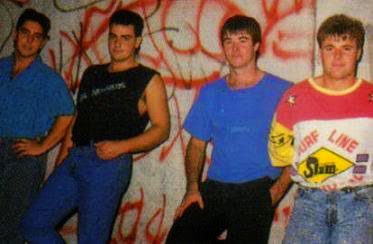 In an article published by the faith site Patheos on Wednesday, one of the original co-founders of the popular Christian band Newsboys revealed that he has since renounced Christianity and now identifies as an atheist.

“I always felt uncomfortable with the strict rules imposed by Christianity,” George Perdikis, who co-founded the group in 1985, wrote in the guest post. “All I wanted to do was create and play rock and roll … and yet most of the attention I received was focused on how well I maintained the impossible standards of religion. I wanted my life to be measured by my music, not by my ability to resist temptation.”

He provided a synopsis of his life story and how the became involved with the group that is now one of the largest in the history of contemporary Christian music. Perdikis said that after he was kicked out of a secular high school in 1981, his parents placed him into a Christian school, but he “only lasted six months there.”

It was during this time that he met two youth who had an interest in drumming. And since one of them, Peter Furler, “had a bigger drum kit than the other guy,” Perdikis decided to hang around Furler. The two began to play music together.

But as Perdikis also played with Sean Taylor, a teen involved with a different band, he invited him to join him and Furler, and the three became a trio. Perdikis states that he later invited John James, who attended his family’s church, to join the group as well.

As time progressed, the foursome went from a cover band to performing their own music. Perdikis left the military and began to pursue music full time.

“The choice to become a ‘Christian rock band’ was heavily influenced by Peter’s parents, Bill and Rosalie Furler,” he explained. “As fundamentalist Christians, the only acceptable form of music was the kind that worshiped God. Bill and Rosalie were like second parents to me and, for that reason, I never questioned their advice.”

Connect with Christian News
The band later became known as the Newsboys, and after traveling with Whiteheart, went on to record their first album. Perdikis said that he co-wrote songs on the first two albums and toured with the Newsboys until he decided to quit in 1990 because he was more interested in music than spirituality.

“As I carved out a life for myself away from the church, I began my own voyage of inquiry into what I believed. My perceptions started to transform when I became interested in cosmology in 1992,” he outlined. “I learned so much and was blown away by all the amazing scientific discoveries and facts. When my marriage dissolved in 2003, I turned my attention to human psychology.”

It was just years after his divorce that Perdikis didn’t want to have anything to do with God at all.

“By 2007, I renounced Christianity once and for all and declared myself an atheist,” he said.

Perdikis then concluded his piece with taking issue with the Newsboys’ appearance in the film “God’s Not Dead,” and suggested that the group isn’t as righteous as their music.

“The movie demonstrated the pervasive attitude of Christians. They demonized everyone while giving a pass to their own particular brand of Christianity, making themselves look like fluffy white angels with perfect, synchronized lives,” he wrote. “The truth is—from someone who knows what went on then and what goes on now—the Newsboys aren’t as holy as they profess.”

The Newsboys have not yet responded to Perdikis remarks, but some Christians who have read the trending article opine that from the details in Perdikis’ piece, he may have never been a Christian in the first place.

“Unfortunately , it sounds as if this guy was never saved to begin with and was never interested in being so at any time,” wrote one commenter named Deborah. “One of the biggest lessons (and disappointments) for me since being saved is that not everyone who calls themselves ‘Christians’ really are.”

“Exactly. He never had it,” another named Victoria wrote. “You can read the attitude in it. He wanted to live a secular life and found that being held to a righteous standard was burdensome. It sounds like he was raised in it but never embraced it. There is no testimony, no love of Jesus in it anywhere. He wanted to live like the world and finally cast off the last cords holding him back from that. His passion was rock-n-roll, not the Lord.”

None of the original members of the Newsboys are currently with the band, but all except Perdikis still profess Christianity.