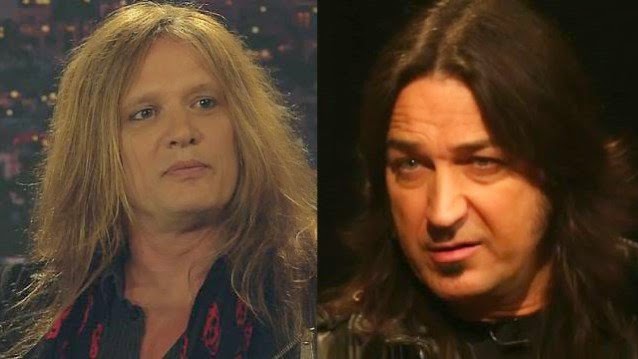 During Sweet's appearance on the January 19 edition of Eddie Trunk's SiriusXM satellite radio show, "Eddie Trunk Live", Michael was asked if there was any truth to reports that he was supposed to be collaborating with Bach on some new music. Michael responded: "I don't wanna throw him under the bus or make him feel awkward or weird. I was approached to do a Sebastian album… to produce it and to co-write with him and basically try to kind of go back to those powerful songs from the past. Not make a dated record, but just that style, the anthemy SKID ROW stuff that everybody loves. And that was the plan."


He continued: "Management got involved, and Sebastian and I e-mailed each other back and forth. It was going down the track a little ways and all of a sudden it came to a screeching halt. He decided he wanted to do an acoustic album, or wanted to do this, or wanted to do that. And I was just, like, 'Guys, let me know what's going on, if it's going on.' And I never really heard any more about it, so I guess it's not happening. But it would have been cool."

Sweet added: "I'll tell you right now, I think I could have helped Sebastian make a killer album. But hey… We'll never know."


ACCURATE? @Shawman23 FACT: No member of STRYPER was EVER asked to Produce ANY album by Sebastian Bach! EVER. Who do U think asks that?? Omg!
— Sebastian Bach (@sebastianbach) enero 29, 2015

Michael also offered a theory as to why so few of Bach's 800,000 Facebook followers purchased the former SKID ROW singer's latest solo album, "Give 'Em Hell", when it was first released. Sweet told Trunk: "This isn't a bash against Sebastian at all; it's just my opinion. I think people wanna hear Sebastian of old. They wanna hear the SKID ROW Sebastian. They wanna hear the hits. And he's giving them modern rock. It's ['Give 'Em Hell'] a good album, it's a good-sounding album, but it's not the glory days."

After a fan wrote on Twitter that "the points M. Sweet made about fans wanting 'old school' Bach sounds - are ACCURATE. Not rude or mean. Just true," Bach responded: "ACCURATE? FACT: No member of STRYPER was EVER asked to produce ANY album by Sebastian Bach! EVER. Who do U think asks that?? Omg!"