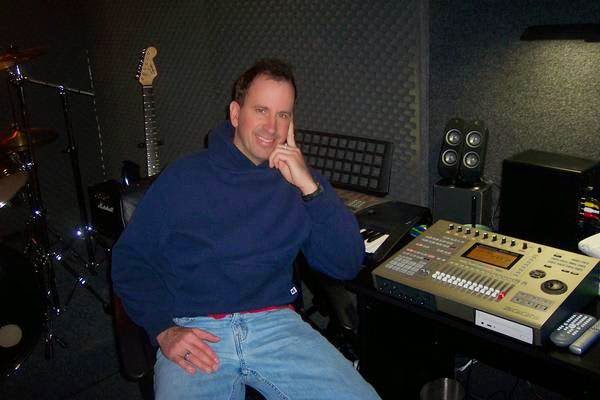 Chris Hyde (Born January 3, 1965), who was the first  Holy Soldier drummer in 1985, also the first drummer from Deliverance from 1985-1990, who also participated in 1991 in Vengeance Rising, has died at age 50. Chris was dealing with a long-term illness, and he went home to be with the Lord at 11:45 (Wednesday, February 18, 2015) last night with a family friend by his side. So has released the news a few hours ago, through the social network Facebook. There are many people who are writing their condolences on the facebook profile of Chris.

Here are some reactions of musicians from bands on Facebook:

Jimmy Brown (Deliverance, Vengeance Rising, Betrayal): I'm so shocked, and In a state of disbelief! Chris was a talented drummer and musician! I am saddened beyond words to hear of his passing... Rest In Peace Christopher (alien) Hyde... Find your rest in the arms of Saviour!
I met Chris Hyde in 1985 when auditioning drummers to start a band. Chris showed up to my parents house with this huge double bass Gretsch kit and Paiste cymbals. Before he even played, I was like "he's in!" LOL... He told me he played in the band Holy Soldier, but had recently left the band and was looking for something new... We warmed up with a Stryper song, then I asked if he knew anything secular. We both cowardly admitted that we like Sabbath. So I broke into Mob Rules, and Chris followed suit and just owned it!


We met again except this time, I showed him my own material. Without even planning it, Chris just started coming over and we would jam. We played our first show, only 3 songs. We opened for a band called 99 Times. We didn't have a name, so we went out under the name "anointed". We later changed the name to Deliverance, and away we went...

My fondest memories of Chris was his incredibly strange sense of humor, characters he would perform with embarrassment like "Shah", "The Spider" and "Ray"... He would make these faces, and just say the name... It was quite odd and remarkably funny. I can't remember another friend of mine that made my Mom laugh so hard she'd cry. He loved entertaining, that's for sure...

I was only 15 years old when we met. Chris was 20... I remember we got along so well despite the age difference. It was our love of music and God that brought us close. Chris was a tongue talking, Holy Spirit filled bible believer, and wasn't ashamed to admit it! He always encouraged me to share from the stage and rain fire and brimstone at the audience! He would pray with me and for me! Such a great guy...

I remember our first big concert, we wanted to make our presence known, so Chris picked me and my girlfriend Helen up at midnight 2 Saturday's before the show. He had 3 cans of spray adhesive, and we had 300 flyers and plastered high schools, bars, anything we could spray and stick! I remember months later the school where Helen went, they were still trying to scrape the flyers off the doors we had adhered them to... LOL... Chris called us "The Midnight Flyers"...

I have a ton of memories flowing thru my mind, but just thought I would share those... Chris was one of the most thoughtful people I know. He stuck by my side thru the first 5 years of Deliverance through thick and thin. But life called, and he moved in another direction at the tail end of 1990... I knew then that I would look at those 5 years as special, magical, memorable, lots of laughter, lots of tears, but those early unsigned years were possibly the best in my musical career... Because it was about the music and the message! It consumed Chris, Brian Khairullah and myself and kept us going! We went thru guitar players like a recessive gene, but in 1987 we found Glenn Rogers! We recorded the infamous Greetings of Death demo, and it all seemed to fall into place from then on till we recorded our first record together...

25 years ago, we recorded with yet, another new guitar player named George Ochoa the now classic CCM album "Weapons of our Warfare"... I am so glad that Chris, Brian, George and myself were able to record what would be later called the pinnacle Christian Thrash Record!

I remember Chris coming to me and saying "you have to put in the lyrics something about praying in tongues... So, when writing the lyrics to Flesh and Blood, I wrote:
"Pray, always with all supplication in the Spirit"... He was pleased... Emoticono smile

So it brings me today... I get the call from George Ochoa telling me the news that our brother had fallen ill and passed away... I was in the parking lot of Costco with my wife, and I told George I'd call him back... I looked on FB, checked some posts and verified that this was the case... I began to weep... Both my wife Helen and I together...

I hadn't spoken to Chris in many years, and in an instant, I regretted not staying in contact... Even if to say hello... How are you? Life tends to get a hold of you, and tosses you around like a flower pedal caught in a wind storm... And you forget that staying touch means more than you can truly imagine... Especially with those whom you shared very special and enigmatic moments with!

Chris... You will always be remembered for many things... Great Drummer, Brother in Christ, Funny Guy, Good Father, Loving Husband, etc... But I will always remember you as a comrade, a fellow soldier, and mostly a valued friend...

Rest in Peace my Brother... We will see each other again...

Larry Farkas (Vengeance Rising, Holy Soldier, Deliverance Die Happy, Once Dead): A great man and Brother left us today. Love and miss you Chris, You always made me laugh, And i had some of the greatest times of my life with you. Thank you for being my Brother, Friend and Band mate in both Holy Soldier and Deliverance. Welcome to Eternity. Rock on.

Glenn Rogers (Deliverance, Vengeance Rising, Hirax, Primal): Today I got word that I lost a good friend and former Deliverance band mate Chris Hyde. He was the reason why I joined D. We worked together painting houses with his brother Randy. I have so many memories of him. I will miss you bro. 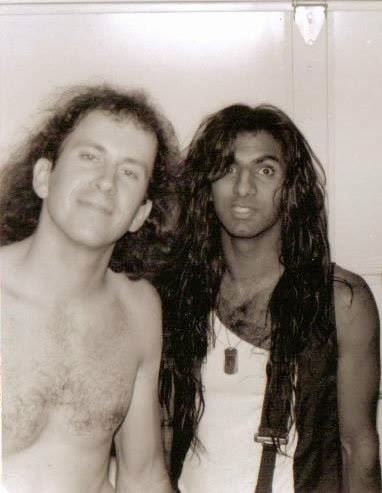 Brian Khairullah (Deliverance, Max Blam Jam, Kantation):I received sad news tonight about an old friend, Chris Hyde. He passed away today. Chris was an exceptionally talented musician who I met in the mid 1980s while he was a member of Holy Soldier. Later he joined a band called Deliverance and he often told me about his friend Jimmy Brown. In fact, I met Jimmy when Chris invited me (without Jimmy’s knowledge) to audition to sing for the new band he was in. Of course, once I met Jimmy and heard him sing…and play guitar, I knew that they did not need a singer. When that incarnation of Deliverance disbanded Chris and I had the opportunity to jam together when we formed a band with one of his former band-mates from Holy Soldier, Larry Farkas. Our band with no name was short-lived as the three of us ended up joining Jimmy Brown to form a new version of Deliverance, one that, for several years, kept a main core; Chris, Jimmy and me. We played concerts all over the U.S., recorded several demos and albums and went through quite a few lead guitarists, including my good friend Glenn Rogers and George Rene Ochoa. It was a wonderful and inspiring time for all of us. What an experience to have and to share with such great friends!


Chris will be missed by all who knew him. He had a unique sense of humor that kept everyone entertained, and he had a good heart.

Manny Morales (Deliverance, Jude, Fat Bastard) : My deepest condolences, may our lord bless and comfort your family at this time. I had the pleasure to jam with an Awesome drummer and brother in Christ, who is now in the presence of our KING OF KINGS & LORD OF LORDS... I was blessed sharing some really good times with Chris and he will be trully missed. Thank God for his talents and blessing others with his gift and influencing others to do the same. Save me a spot on the worship team brother. We will jam jam jam!! Love you broth

George Rene Ochoa (Deliverance, Vengeance Rising, Mortification): Love Chris, you were part of a special time of my life. Some of my most memorable days to date. Deliverance made more of an impact on people's lives for the Lord than we will ever know. I will always cherish our time together. Thanks and I'll see you in the Kingdom.

Pk Mitchel (Neon Cross): Unbelievable... i dont know what happened? i had talked to Chris several times by phone about 5 years ago but not since.
From a FB friend of his: "Chris Hyde was taken off of life support just a little bit ago tonight. Not sure that any of us can handle anything else on top of...everything else.

We fight this battle not against flesh and blood. We're about to see if no weapons formed against us will prosper."

Glen Mancaruso (Vengeance Rising, Die Happy): Chris buddy l hope they have Paiste cymbals for ya....R.I.P. brother
Psalm 150:5-6
Praise him with a clash of cymbals;praise him with loud clanging cymbals.
Let everything that breathes sing praises to the Lord!

Pastor Bob Beeman: So sorry to hear of Chris' passing. He was an amazing man. But I am happy that he is finally painless, and in the presence of Jesus!

Doug Levy (Overdrive Band): R.I.P. to Deliverance drummer Chris Hyde! Our band Overdrive Overdrive: Remembering the Basher) had the privilege to open for them on several occasions, including our "Showcase" for Frontline Records (Intense Records) in 1991 (the same weekend I met my wife!)...
Chris was a great drummer and a great man of God! He will be missed. I reconnected with him in the last few years because of the business he had been doing: soundproof panels that could be used for bands practice spaces.
Heaven welcomes him into the "joy of the Lord"...
In honor of him, I will post as many of my favorite Deliverance songs that are available out there... enjoy!

Rick Martinez (Soldier Band): to Chris' family and friends, my thoughts and prayers are with you. When Deliverance and Guardian played in the SF Bay Area, Chris and Brian from Deliverance stayed at my house, I also shared the stage at a few festivals with him, I am stunned to hear this news


Eric Mendez (Tourniquet): Got this shocking news. I'm a bit speechless. Nothing to say.. Just super bummed out.
First time I saw Deliverance was at garage in Oxnard California. There was about 5 of us experiencing this giant wall of sound. Then I saw Deliverance playing in different places. One of them was in a place called The Oasis in Hollywood in Selma street close to Sanctuary.

Les Carlsen (Bloodgood): So sorry to hear this guys, ours band mates are often times as close as family.


Soldier Band: Soldier would like to send to Chris' family and friends thoughts and prayers for your loss. When Deliverance and Guardian played in the SF Bay Area, Chris and Brian from Deliverance stayed at Rick Martinez' house, we shared the stage at a few festivals with him, we are stunned to hear this news.

Andy Robbins (Holy Soldier): Chris was indeed a great friend, a great spirit and a great band mate. I am so saddened he left us so young.

Recalling a special Bible passage:
For to me, to live is Christ and to die is gain.
Philippians 1:21
Facebook Twitter