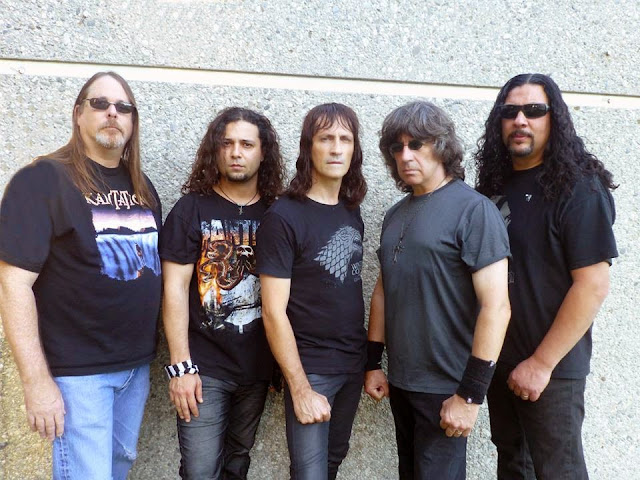 About Primal:  Primal is a return to the primitive, to the bowels, to the roots that identify us as one band, it is a meeting point where the talents of a generation of metal musicians join forces to produce an overwhelmingly powerful sound. Each member brings with them their own unique history from the world of metal.

Alberto Zamarbide, is the unmistakable voice of the legendary Argentina metal band V8. With much succes in the 80s, he then went on to form the band LOGOS in the early 90s. During that time they produced 5 powerful albums, plus a live DVD. Finally, during the winter of 2013, Alberto connects with a group of musicians in the Angeles, and stars on his international career.


Jorge Iacobelis, is a internationally recognized Argentina heavy Metal drummer. In 1995, Jorge was invited by the San Francisco Bay area band Testment to come to the US. Since then he has been involved in the music scene in both San Francisco and Los Angeles. In 2003, Jorge was invited to perform with the legendary band HIRAX. He has recorded, and toured the world with them for mny years.

Glenn Rogers, former guitarist ofCalifornia thrash band HERETIC, Since the mid-80s Glen has been part of several bands such as VENGEANCE RISING, DELIVERANCE and STEEL VENGEANCE. In 2003 Glenn Joins HIRAX to record and tour the world for the next eight years.

Wagner Vincenzy, is a talented studio guitarist from Los Angeles California, Wagner has partnered with Jorge Iacobelis on several recording projects. He has played in the local Los Angeles metal scene for some time.

Sandy Vazquez, bassist for the power metl band BLOODLUST. Sandy was part of the original metal scene in Los Angeles. In recent years he was a member of DEATHRIDERS with former Anthrax singer Neil Turbin. With Deathriders Sandy has toured the US, Japon and Germany.

Together these five monsters have joined forces to form PRIMAL. A real heavy metal band with a heavier and powerful sound. They will bring a classic feel with a moderm punch.

PRIMAL has started work on their debut cd/album for release in 2015. Tour dates will fallow.