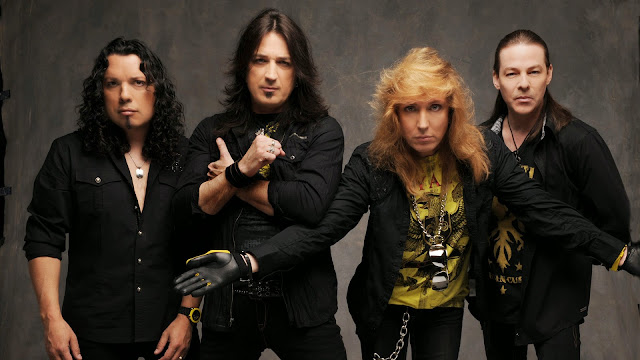 An audio sample of one of the new STRYPER songs can be streamed in the video clip embedded within the Facebook post below.

Regarding the musical direction of the new STRYPER material, Michael Sweet told Eddie Trunk's SiriusXM satellite radio show, "Eddie Trunk Live": "It's gonna be… I don't wanna scare any fans away or anything, but it's gonna be the heaviest album we've done. Not in the sense that it's gonna be thrash metal or anything like that. It's definitely got a little bit of a darker vibe to it lyrically and musically. Some of the songs are tuned down — not like the modern Drop B stuff; I'm talking like the E dropped to D, 'Unchained' VAN HALEN kind of stuff. And it's just got a heavy sound to it. And I think when people hear it, in a good way, they're gonna go, 'That's STRYPER? What?' I think they're gonna be shocked."

Asked if there are still any religious references in the new STRYPER lyrics, Sweet told Canadian journalist Mitch Lafon: "Absolutely. Some of the words themselves are actually taken from the Bible, so that's still there. The lyrics are definitely on the bold and powerful side. They're not like the lyrics of old.

"A lot of our lyrics, I read back through the lyrics, and at times I'm a little embarrassed because they were just so repetitive and shallow at times — just real simplistic 'Rock, rock rock. Jesus, Jesus.' These lyrics are definitely a lot deeper. I'm pulling from the Bible at times."

He continued: "There's a song about God creating the heavens and the earth. It's called 'Let There Be Light'. And it's about in the beginning, and it's taken right from Genesis. There's a song about the Devil; it's called 'Fallen'. It just talks about how when the Devil, when he was Lucifer, an archangel in heaven, when he walked, he was the angel of music, and when he walked, there was music. It tells the story in that song of, basically, about how he's fallen, and why, and how. It's a real powerful song.

"I've got a song called 'Big Screen Lies' that's about how the film industry portrays Christians as complete buffoons one million percent of the time. And that's just not the case. It is sometimes, but those buffoon Christians don't represent all of us."