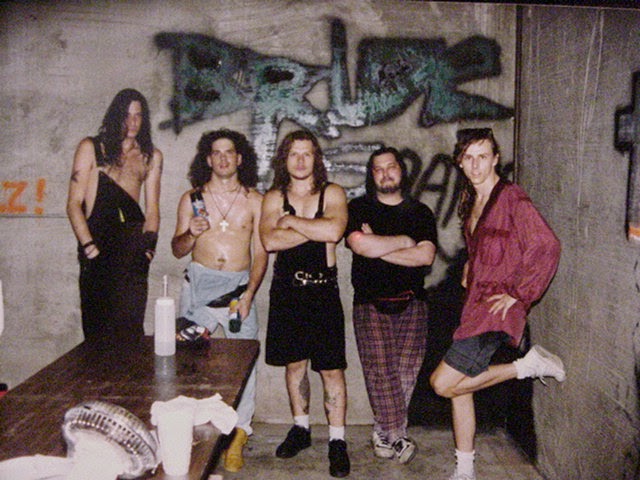 Just like many other bands, Bride has many more videos on live. They only have seven official videos. All their videos are from the 90s, and any video of the 80s or 2000's.  Their first two videos "Everybody Knows My Name" and "Troubles Times", were filmed in 1991 for the cassette video "Metal Mission", though these are  videos on live, also are the official videos these two songs.

Psychedelic Super Jesus is one of the best songs of Bride, your video is really psychedelic, but I must say it's a bad video, it's a great song, with an ugly video.

Mix the rock with hip hop, does not seem a good idea. Since Aerosmith and Run / DMC did "Walk This Way" in 1987, many others did the same. Bride and Hip Hop group Disciples Of Christ, made their own version of "God Give rock and roll to you" in 1993, is a good video, but if the song talks about Rock and roll, should not play another musical style which is not rock and roll. Hip hop, really?

In the second half of the 90s, the sound of Bride was not the same, but even so it was still a great band, the Mamma  video of 1995 is proof of that.

The Worm is a true classic, great song, great video, a great band, when I heard that song for the first time, I thought I was listening to Nirvana, very crazy.

Under the Blood, is not the best proposal Bride, when I watch this video, seems to be another band, in an interview that we did to Dale in 2014, said: "Bride has never been afraid of trying new things. I have always enjoyed it when a band steps out of their comfort zone and flexes their musical muscle to record different styles. For us we are happy to have provided many different faces of Bride for our fans." ... But many of his fans, has never  been very happy with some of the faces offered by Bride

Dale Thompson remembers from each of these videos:


Dale Thompson: Everybody knows my name was a video that was staged on a sound stage in Oklahoma with choreographers and makeup artist. We were not thrilled with doing a video like this.

Dale Thompson: Troubled Times was shot at the same time and both were to be used by Star Song Communications to launch band tours.

Dale Thompson: Psychedelic Super Jesus for us was horrific and a fail. We did not know that Star Song was doing the video. They did it without contacting us and when we finally saw it we were not impressed. There is no footage of Bride in the entire video and the mouth that is lip syncing the song is not mine.

Dale Thompson: God gave Rock n' Roll to you was shot in a Cotton Mill at about 3 am when were were returning home from a show. It was cold, we were exhausted but is one of my most favorite videos. The guys in D.O.C. were very cool and Troy's guitar riff to what I consider a lame rock song added the spark to make it the best version of that song ever recorded.

Dale Thompson: Mamma was the easiest video to shoot. We were with Rugged Records at this time. Jim LeVerde from Barren Cross was the camera man and P.K. Mitchell helped on the video as well. It was shot in California and turned out really nice.

Dale Thompson: The Worm was awesome. We were going for that creep dark theme. The record company did not like the name of the song and wanted us to drop "worm" from the title and add "Word." So it would have been "The Word." We found that a stupid idea and rejected it and did it the way it was originally written. The Worn is probably our best video.

Dale Thompson: Under The Blood was an awesome video to shoot. We recorded it in an abandoned mental sanitarium that primarily had not been cleaned well. The floors and walls were filthy and there was a room full of dead black birds upstairs. I remember our noses becoming clogged with some black dust during the shoot. But the video was cool for us. Star Song never used it for our advantage and thus it was a wasted video.
Facebook Twitter