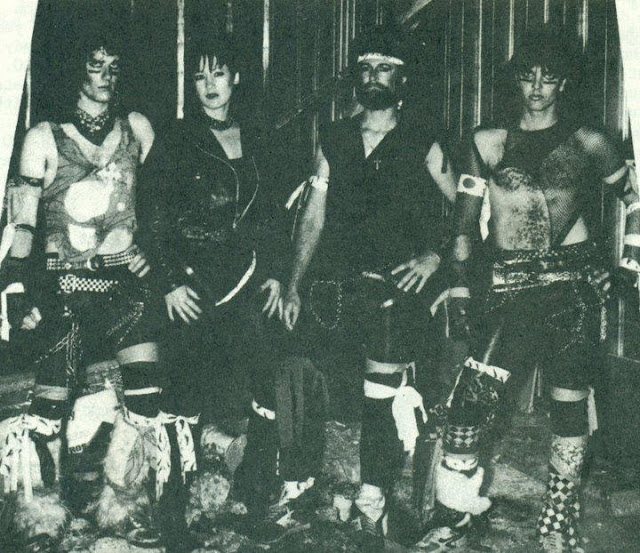 KEEP HOLDING ON...GREAT NEWS TO SHARE COME JUNE.! YES, ALL OF BARNABAS L.P'S ARE BEING REMASTERED, INTO C.D.FORMAT. THEY ALL WILL BE AVAILABLE AT THE RATE OF APPOX., 1 C.D. PER MONTH! "ALS"-IS GOING TO BE THE 1ST ONE~ STATING THIS~ I HAVE A QUESTION FOR YOU ALL, WHAT WOULD BE YOUR PREFERED ORDER OF RELEASES?? JUST CURIOUS TO SEE WHICH ONES YOU'D LIKE 1st, 2ns, 3rd ETC...ON ALL 5??!PLZ, JUST POST SOMETHING HERE, OR PM ME ON MY FB PAGE! THE GRAPHICS ARE AWESOME, THE REMASTERES ARE THEE BEST,~ I'VE EVER HEARD..AND I'LL BE LETTING YOU IN ON SOME EVEN MUCH COOLER NEWS SOON!! ALWAYS, NJO,WP*


Thus he was announced the news in barnabas fanpage on facebook, the above was written by vocalist Nancyjo.

Barnabas was one of the first bands of hard rock and Christian metal. Years before to appeared bands like Stryper, Bloodgood, Barren cross or Saint, already existed Barnabas. After his break in 1987, it remains a very liked band, but very underestimated. His first album "Hear the light" of 1980 is a true classic, with a sound that reminds me of bands like Led Zeppelin or Heart.

But the best moment of Barnabas, was with his third and fourth album, "Approaching light speed" and "Feel the fire", 1983 and 1984 respectively, if you have not heard these two albums, you buy them soon, are true masterpieces of metal. Two of the best rock records I've heard in my life.

With a very futuristic sound, incredible guitar solos by Brian Belew, really fascinating songs. It makes you be captured by his music. It is no exaggeration to say that the music of Barnabas, is as great as the music of Black Sabbath and Deep Purple