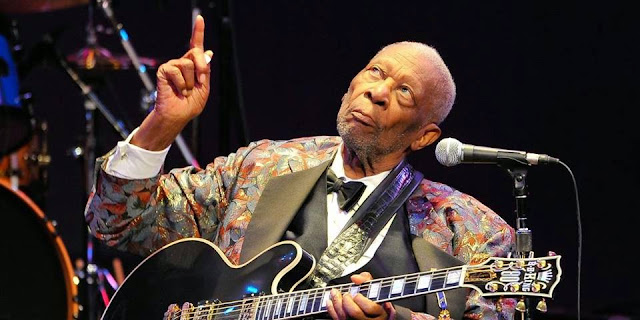 Riley B. King was born on September 16, 1925, on a cotton plantation near the town of Itta Bena, Mississippi, the son of sharecroppers Albert and Nora Ella King. He considered the nearby city of Indianola, Mississippi to be his home. When Riley was 4 years old, his mother left his father for another man, so the boy was raised by his maternal grandmother, Elnora Farr, in Kilmichael, Mississippi.

While young, King sang in the gospel choir at Elkhorn Baptist Church in Kilmichael. It seems that at the age of 12 he purchased his first guitar for $15.00, although another source indicates he was given his first guitar by Bukka White, his mother's first cousin (King's grandmother and White's mother were sisters). In 1943, King left Kilmichael to work as a tractor driver and play guitar with the Famous St. John's Quartet of Inverness, Mississippi, performing at area churches and on WGRM in Greenwood, Mississippi.

In 1946, King followed Bukka White to Memphis, Tennessee. White took him in for the next ten months. However, King returned to Mississippi shortly afterward, where he decided to prepare himself better for the next visit, and returned to West Memphis, Arkansas, two years later in 1948. He performed on Sonny Boy Williamson's radio program on KWEM in West Memphis, where he began to develop an audience. King's appearances led to steady engagements at the Sixteenth Avenue Grill in West Memphis and later to a ten-minute spot on the Memphis radio station WDIA. The radio spot became so popular that it was expanded and became the Sepia Swing Club.

Initially he worked at WDIA as a singer and disc jockey, gaining the nickname "Beale Street Blues Boy", which was later shortened to "Blues Boy" and finally to B.B. It was there that he first met T-Bone Walker. King said, "Once I'd heard him for the first time, I knew I'd have to have [an electric guitar] myself. 'Had' to have one, short of stealing!

Rolling Stone ranked King number 6 on its 2011 list of the 100 greatest guitarists of all time (previously ranked number 3 in the 2003 edition of the same list). He was ranked No. 17 in Gibson's "Top 50 Guitarists of All Time". According to Edward M. Komara, King "introduced a sophisticated style of soloing based on fluid string bending and shimmering vibrato that would influence virtually every electric blues guitarist that followed." King was inducted into the Rock and Roll Hall of Fame in 1987. He is considered one of the most influential blues musicians of all time, earning the nickname "The King of the Blues", and one of the "Three Kings of the Blues Guitar" (along with Albert King and Freddie King). King was also known for performing tirelessly throughout his musical career, appearing at more than 200 concerts per year on average into his 70s. In 1956, he reportedly appeared at 342 shows.

In 1990, King was awarded the National Medal of Arts by President George H.W. Bush. In 2006, he received the Presidential Medal of Freedom from President George W. Bush. He is widely regarded as one of the most influential blues guitarists of all time, inspiring countless other electric blues and blues rock guitarists

These are some of the reactions on the death of BB King::

“This morning, I come to you all with a heavy heart.

BB King was the greatest guy I ever met. The tone he got out of that guitar, the way he shook his left wrist, the way he squeezed the strings… man, he came out with that and it was all new to the whole guitar playin’ world. He could play so smooth, he didn’t have to put on a show. The way BB did it is the way we all do it now. He was my best friend and father to us all.

I’ll miss you, B. I love you and I promise I will keep these damn Blues alive. Rest well.

All my love,
Buddy”

Michael Sweet: God Bless B.B. King, his family and all fans around the world. He touched many hearts with his spirit & God given talent! Heaven just received The King of Blues. Love & Respect...

Phil Keaggy: Today we mourn the loss of a legend, BB King. Although you are gone, your music will live on for lifetimes to come.

Rex Carroll: "Live at the Regal" a great blues album. Listened to that many times over. It's hard to put in to words the feeling of loss for a great musician like B.B. King. I take comfort from the words of Rev. 3:20 "Here I am! I stand at the door and knock. If anyone hears my voice and opens the door, I will come in and eat with that person, and they with me."

President Obama: "The blues has lost its king, and America has lost a legend. B.B. King was born a sharecropper’s son in Mississippi, came of age in Memphis, Tennessee, and became the ambassador who brought his all-American music to his country and the world. No one worked harder than B.B. No one inspired more up-and-coming artists. No one did more to spread the gospel of the blues.


Three years ago, Michelle and I hosted a blues concert at the White House. I hadn’t expected that I’d be talked into singing a few lines of “Sweet Home Chicago” with B.B. by the end of the night, but that was the kind of effect his music had, and still does. He gets stuck in your head, he gets you moving, he gets you doing the things you probably shouldn’t do – but will always be glad you did. B.B. may be gone, but that thrill will be with us forever. And there’s going to be one killer blues session in heaven tonight."