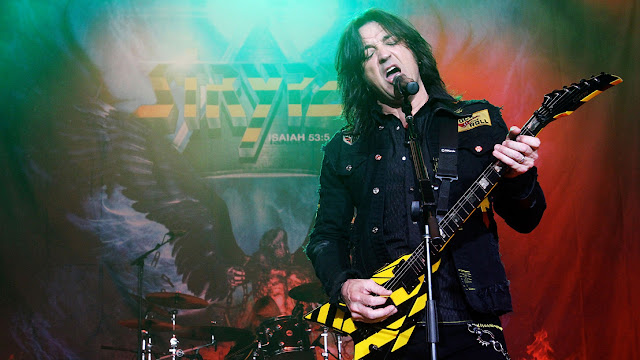 Stryper will release their eighth studio album Fallen on October 23, it’s been confirmed.

The band have been working on the follow-up to 2013’s No More Hell To Pay at SpiritHouse Studios, Massachusetts since February. And one of the tracks will be a cover of Black Sabbath’s After Forever from their 1971 album Masters Of Reality.

Frontman Michael Sweet says: “It takes a lot to get me really excited and the new Stryper album Fallen has done it! This is our best in my humble opinion.

Michael Sweet told Eddie Trunk's SiriusXM satellite radio show, "Eddie Trunk Live": "It's gonna be… I don't wanna scare any fans away or anything, but it's gonna be the heaviest album we've done. Not in the sense that it's gonna be thrash metal or anything like that. It's definitely got a little bit of a darker vibe to it lyrically and musically. Some of the songs are tuned down — not like the modern Drop B stuff; I'm talking like the E dropped to D, 'Unchained' VAN HALEN kind of stuff. And it's just got a heavy sound to it. And I think when people hear it, in a good way, they're gonna go, 'That's STRYPER? What?' I think they're gonna be shocked."

“I look at every album as if it may be our last. This keeps me focused on trying to deliver our best and if it is our last (and best) we’ll go out on an up note.”

Some of the new songs are "Let There Be Light", "Big Screen lies" and the title track to the album.

Further details will be issued in due course.

Earlier this month, Sweet touted the idea of recruiting another vocalist for their live shows, a suggestion which received a mixed response from fans. He’s planning to release his seventh solo album next year.
Facebook Twitter