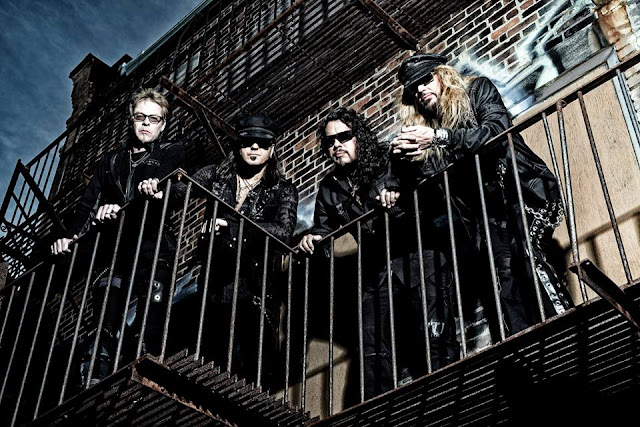 Stryper public on Wednesday July 8th the single "Yahweh" that will be part of his next album "Fallen". In a few hours he became the #1 at Amazon in Hard Rock/Metal.
This is a song of 6 minutes, sound much heavier and progressive than anything you've heard before Stryper, Michael makes piercing screams,  and murderers riffs  of Oz Fox.

About "Yahweh", Michael Sweet had this to say: I met Clint Lowery ofSevendust on a plane last year. He said hello and when we got off the plane we took a photo and he mentioned the influence Stryper was on him when he was younger. It was surprising to hear due to the obvious talent that Clint is blessed with. We started following each other on Twitter and Instagram and then we exchanged contact info. I reached out to Clint and asked him if he would like to co-write a track or two for the new Stryper album. Clint agreed and sent me a few riff ideas. I was instantly drawn to the riff that he sent which eventually became "Yahweh". I took his original idea and somehow created this 6:30 minute song, which is quite epic and honestly may be one of the most powerful songs we've done in a long time. I sent it to Chris Jericho and he texted me writing, "Yahweh is your best tune, maybe since you reunited". Clint is a very great and gifted writer so I wanted to have him involved in one way or another. Once the song was mixed I sent it to Clint and he responded with, "The tune is amazing man. It's got that old school spirit with this modern take. That choir vibe on chorus is beautiful. Vibe change for the solo. Epic my man. Solos are stellar. I don’t remember sending anything near this cool;) We're excited to be able to finally share this song with all of you!
To answer a few things that have been asked: 1st - Who played what solo? I play the first half of the solo, Oz plays the second half. 2nd - What are the lyrics? Here are the lyrics to "Yahweh":

A crown of thorns, it was placed on His head
They clothed him in purple and stated their case
“He is The King of the jews" as they slapped His face

Pilate said, “I find no reason to charge Him”
As soon as they saw Him they said crucify
He just proclaimed to be God, He surely must die

Jesus finally decided to answer him
You have no power at all over Me
If it didn’t come from above, you’re too blind to see

And so, the soldiers took Jesus
Dragging His cross to a place where He knew
They hung a sign that would read “The King Of The Jews”

They nailed His flesh to the wood
He said “It’s Finished” and laid down His life
Gave up His spirit for all - He was crucified!