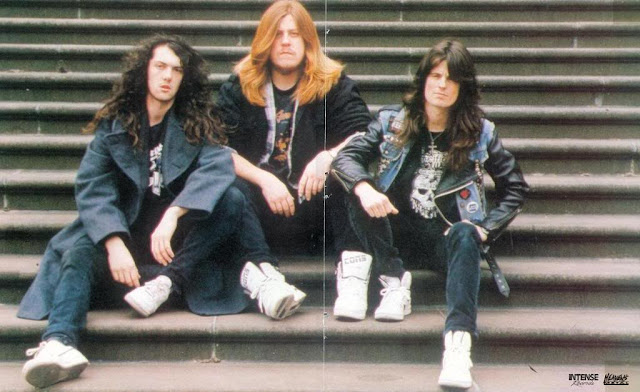 Scrolls of the Megilloth is the second studio album by Christian extreme metal band Mortification. The band's most famous release, this album is full-on death metal, with the thrash metal roots barely showing, and possibly their most extreme album to date. According to Allmusic, the album "garnered the band some attention from the heavy metal underground" and contains "some of the most frightening vocals ever recorded." In 2010, HM Magazine ranked Scrolls of the Megilloth number 17 on the Top 100 Christian Metal Albums of All Time list with Van Pelt stating that "Though the band has been living it down ever since, this album raised the standard of Christian grindcore to almost unattainable levels.

Scrolls of the Megilloth was recorded at Studio RBX, Richmond, Melbourne, and mixed at Toybox Studios, Northcore, Melbourne. The album was produced by Doug Saunders. Mortification's line up consisted of the bassist-vocalist Steve Rowe, guitarist Michael Carlisle, and drummer Jayson Sherlock. Both Carlisle and Sherlock did some background vocals, and Sherlock played lead guitar on the last song "Ancient Prophecy" because Carlisle was a more experienced rhythm guitarist than lead guitarist, therefore the album does not contain guitar solos.

Scrolls of the Megilloth begins with the intro of the song "Nocturnal", consisting noises of the night from chrirring crickets to croaking frogs, creating a dark cult horror movie feel. An ominous drum beat slowly becomes louder, accompanied by a drop D tuned guitar riff, turns into a chaotic speed as the vocals by Steve Rowe growl the words "Nocturnal/ Creatures of the night" with the word "Creatures" sung in a frightening shrieking voice. After this the album continues on the grindcore influenced death metal direction, reminiscent of the British bands Bolt Thrower, Napalm Death, and Carcass. A mostly up-tempo album, the songs "Raise the Chalice" and the epic "Ancient Prophecy" take a more mid-tempo approach. Scrolls of the Megilloth is characterized by Jayson Sherlock's odd and fast blast beat drumming, Michael Carlisle's aggressive but precise rhythm guitar work, Steve Rowe's double layered "grind baritone vocals of extreme reality", and high tuned, apparent, and groovy bass playing. Rowe's vocals get extremely guttural on a verse on the song "Ancient Prophecy" that cites a prophecy of King James Version of Isaiah 53:5. The title song, "Scrolls of the Megilloth", which begins with a haunting organ melody before turning into a chaotic tune, is one of the best known songs on the album and was released as a single. "Death Requiem" contains a gloomy speaking voice interpreting a funeral event.

The lyrics on Scrolls of the Megilloth are as extreme as the music, dealing with the common themes of death metal such as death, violence, occult, and horror from a Christian point of view: On "Eternal Lamentation", the ungodly scream their pain in the fiery pits of hell; "Terminate Damnation" is about spiritual warfare against evil and moral impurity, and "Necromanicide" warns against communicating with the dead through spiritism because "only demons answer their call". The title "Scrolls of the Megilloth" is a term in the Old Testament that means The Five Scrolls (Five Megillot): Ruth, Esther, Song of Solomon, Lamentations, and Ecclesiastes. The song deals with the purposes of these books. According to the album liner notes, Steve Rowe studied at a Bible college a year before the album was recorded and he learned that these books were read at feasts and celebrations of significant Jewish dates. Rowe writes: "When we read 2 Timothy 3:16 we realised that all scriptures are there for a purpose and should all be studied to guide us." 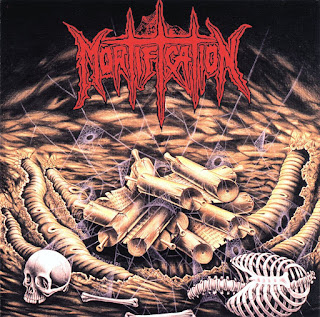 All songs written by Mortification.