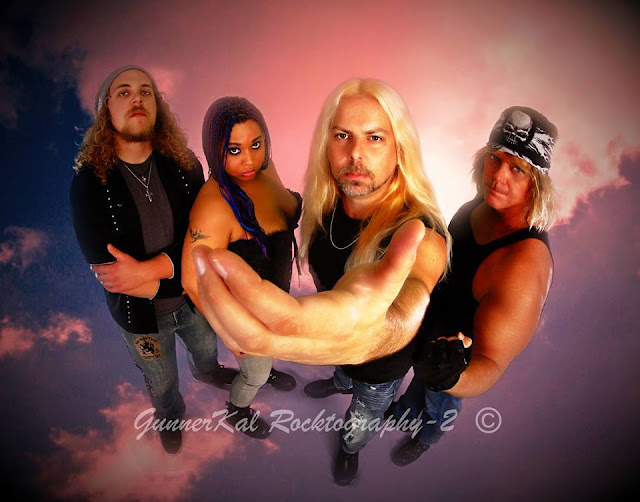 It is also a miracle for everything the band means, around the personal life of the founder Paul Ames.This great singer, defines Crimson Storm as a very lengthy series of miracles and told about his personal experience, and how his dream of making the band started, on his Facebook account wall.

“When I was a kid, I had a friend named Wayne. Wayne was the dude who had done one too many drugs, and left his brain kinda scrambled. Then one day, Wayne wasn’t scrambled anymore. Which always struck me as a miracle in and of itself. He told me about this time, He and his mom were driving in a rain storm and the car stalled in a dip in the road, submerged the car underwater, and how the Lord had miraculously rescued them both. I believed him, I knew He wasn’t lying, knew He believed what He was telling me…”

This gets interesting for Stryper fans, that in spite of they have a lot of critics for being in secular market, they have reached many people with their lyrics and music. In this case, Paul, who told the following: “..He started talking about the Lord, and the Bible. I wasn’t ready for all that, but I was ready for Stryper. His room was all about them. Posters everywhere. I loved going to his room and having him play Stryper. They rocked so hard! I loved them!”

Living on the streets
“At 15 my family threw me into the streets to live. From age 15-18 I lived in the streets. The streets had became the only home I had, and stealing, which had been a hobby, had now became my career. I wasn’t much for begging, had to much pride for that. Stealing I could do though. People had been so horrible to me, my whole life that I honestly didn’t care. I figured no one cares about me, why should I care about anyone else?
I lived in abandoned houses and cars, and drifted around. While normal kids were finishing high school, being kids, going to Proms, I lived on the streets, on the run, as a fugitive.”

Against the Law
“When I turned 18 the Law caught up with me. I did state time here in Arizona, 6 ½  years. Arizona state prison is a very sobering and dangerous experience. One I was blessed of God to live through and come out of in one piece. In fact in 1989, in a place called Cimeron (in Tucson) a couple years into that sentence, I had gotten into a fight and was in the hole, and had a celly named Mike. Mike was a former member of a CA Prison gang, who had recently been born again, and He and I talked. For the first time in my life the Gospel was told to me in plain talk. In real talk, not religious talk. Not someone else’s memorized words, but just a dude telling me simply about his relationship with the Lord. He talked to me in such a sincere and simple way that I finally heard God. And when Mike left that cell, I hit the floor on my face and poured myself out before God and was born again on that cell floor. I remember getting up feeling peace and all new inside. All the pain I had ever felt was gone, and everything looked brighter. I had a very profound spiritual experience, one that changed me forever.” 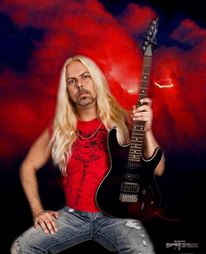 “When I was 11, I heard a band that blew me away, Judas Priest, the album “Sad wings of destiny”. I heard Rob Halford sing, not only was I floored, but from that moment on I knew I wanted to become a Heavy Metal singer. Stryper’s ministry had much to do with my coming to the Lord. There voice was one of the VERY FEW voices that reached me  when I was lost. I wasn’t someone who was gonna go to a Church or crack a Bible anytime soon. But here was this band, speaking to me in “my language”, the language of Heavy Metal, coming from a sincere place, a real place. They instantly earned my respect, ( which I don’t give out easily) for being musically as incredible as my heroes at the time Judas Priest. Their music and message so effected me that I knew I wanted to front a Christian Rock band.”

Why should the devil have all the good music(ians)?
“When I became a christian, I felt a strong calling to music ministry, a call so strong that 20 years of pain and near death experiences couldn’t stop it from coming to pass. And so Crimson Storm was born. Part of that calling on my heart manifested itself in the fact that I was determined to fix what I considered to be a historic wrong, which was “How come secular bands have all the greatest musicians?” I didn’t like that. Didn’t seem right to me. I felt God’s bands should have the best musicians. Stryper proved that point. All message aside, their music, and vocals match any of the super bands of the 80s, and it was that, that drew me in. It’s also what drove me inside, I felt I was called to do the same. To make Christian Rock that musically matches anything the secular world can do, and more!”

Red Rain
“Crimson Storm had to survive however, along with me through not only those 6 ½ years of hell, but even longer, after that state time, my life fell apart badly and I ended up in trouble one last time, trying to do desperate stuff to rescue people. Thought I was Robin Hood for a minute, lost my mind one last time and ended up in federal prison for 12 more years, for attempting to withdraw money from a Bank without actually having an account there. They don’t appreciate that too awful much, and prove it. I started that 12 year sentence out in place called USP Lompoc, in CA. It was called the “new rock”, because it was built in the 40’s to replace Alcatraz (A.K.A. The Rock), when it was closed. It’s  where they put the convicts from the rock.
So there I was in the new Alcatraz, the most sobering and dangerous place I have ever been. Many riots, many deaths, and God protected me and got me through it. It was there in 1995 that I wrote the first Crimson Storm song, called “Red Rain”. I t had begun, ever after all the pain I knew that my dream of a Christian Rock band was alive, and it kept me going.”

The Right to Rock 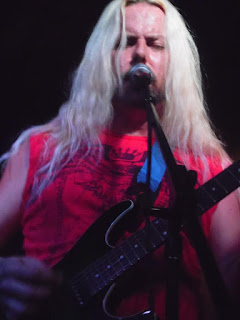 “In 2000 I earned the right to transfer to a lower security yard, and made it to FCI Tucson, where I met my first guitarist, a very gifted one. A guy doing time there too, and it was there that the band of Crimson Storm began to form. We were also blessed to have found a drummer and bassist in there, and we wrote and grew together. We bonded. I was sure these were my guys, and when we got out we re-formed. And all 4 of us who had done time together were in a band out here and doing good. I felt it was so special, the story, that I defended and held on to these guys longer than I probably should have. I took a lot of crap and put up with a lot stuff, because of how special I felt our story was. We finally had the manager we had prayed for for years, and we began to get the attention of labels. It was about to happen, my dream, and then, on 12/12/12 (yes really) I lost my lead guitarist to severe alcoholism. I tried to hold on to my bassist and drummer, but then they resigned too, leaving me holding Crimson Storm again all by myself. Anyone else would have given up, let it die. But God strengthened me, filled me with faith, and me and Janet (Crimson Storm blessed manager) set out to find even greater musicians, to reform Crimson Storm bigger, better and even more incredible,. And God blessed us to do just that, He brought us musicians even greater, but also nice people, sober people. People I can count on and trust.
Crimson Storm is not just a miracle, but a long series of miracles. The devil tried everything to kill this ministry, to de-rail it. He tried for 20 years, and yet Crimson Storm lives!! God is so awesome!”

Paul Ames always talk directly to the fans and friends, thanking for their company and support on Facebook and social media. This helps a lot to the band, and himself who’s still struggling against problems, holding on God’s hands, and keep going his ministry: 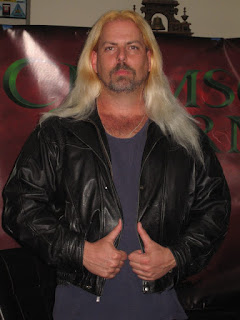 “In building this bands “on line” presence, our social media, I set out to do things differntly than other bands. I made our Facebook wall a very special place, not just a place where a band promotes itself. I’ve always set out to make it a very positive place, an inspirational place. A place where Crimson Storm fans from all over the world not only go to hear our music and follow us, but also to get a good morning each day that’s personal, and one that tries to help everyone have a great day. Also a wall where fans are allowed to share, where we have live public conversations.
I use the wall to share about how God answers my prayers, all the miracles I experience, I share hope, and love, kindness, and I spend time with our fans, being true friends. I spend hours a day keeping the promise I make, which is in Crimson Storm we love our fans as family and we treat them as such. I’m very serious about that too. I grew up wishing I could talk with my music heroes, and I decided that any fan of my music was gonna be the most loved on fan ever! A fan that knows they are loved and appreciated.
What I didn’t  know is what a blessing it would be for me. I struggle with scars from my nightmare of a past, a past that would have broken most people. I did 20 years in Prison, didn’t have a teens, didn’t have a 20s, and didn’t have a 30s.. I did 5 years in the hole, 90 days on death row, I had to leran how to walk again, because I hadn’t walked more than 5 steps in one direction in years. I remember having to tell my feet what to do, to this day I squint under sunglasses. I suffer from severe P.T.S.D., depression, bipolar 2, and anxiety disorder. I have nightmares every night, I live in panic attack, I don’t have them, I liive IN ONE, uncotrollable fits of crying, I forget where I am sometimes.. But everyday I log in to our Facebook wall, and read all the love, the love I get back from you all has gotten me through so much, just as you all say I’ve helped you through rough times, you have done the same for me. In fact there are days your love has literally saved my life.
The Crimson Storm family is a very wonderful and blessed family and growing everyday. I love you all so much! You mean everything to me! You who have stood with me through some of my darkest hours. I have the best family in the whole wide world!! I love you all so much!!! Love, Paul”

For all those who took the time of reading this testimony, I thank you and I ask for you to keep Paul Ames and the band in prayers. And if you have extra time please listen to Crimson Storm.
Facebook Twitter