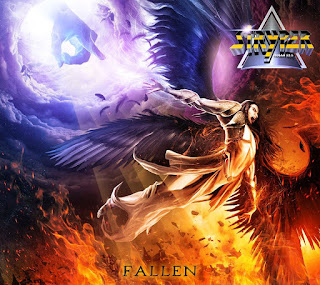 After much waiting, fans of Stryper and Heavy Metal are enjoying the Fallen album, released on October 17, 2015. Stryper began recording the album Fallen in February 2015 under the label Frontiers Records.
Fallen is the follow-up to 2013's No More Hell To Pay, which was a critical and fan favorite for Stryper. Fallen is the 11th studio album from Stryper.

"Fallen" is undoubtedly the heaviest album of Stryper, you imagine that this album would have been released in the 80s? It is clear that stryper is going through one of their best moments, the new album Fallen,  is better than the album NMHTP. Since their first studio album in 2005 after their meeting, they have improved every album released, Murder by pride is better than Reborn, No more Hell to Pay is better than Murder by Pride and Fallen is better than No more hell to pay, definitely they are making history once again, I do not remember another band that has managed to overcome all their albums over and over again.

The album starts with a spectacular song, Yahweh, this is a song of 6 minutes, sound much heavier  than anything you've listened of Stryper.

''It's definitely the longest song we've every done and it's got the most tempo changes we've ever done in a song,'' Sweet said. ''It goes through three different types of sections. It opens with almost a Priest vibe and then goes to a Maiden vibe before the solo and then it goes to like a Metallica vibe almost in the breakdown.

Sweet said despite the intricacies of the song, it took about an hour to write. He says it only took nine days for the album's tracks to take shape.

The second track is the album's title track, Fallen. much has been said that Michael Sweet no longer sings as before, but Michael has closed the mouth to more than one loudmouth, this song starts with a scream extraordinary, just as he did in the 80s. Undoubtedly, Michael decided to show all his vocal potential in this album.

Pride is an amazing song, the piercing screams of Michael Sweet make you want to listen to this song over and over, "It's a perfect merger of the melodic side with the heavy side," Sweet explains. "If you were to combine 'To Hell with the Devil' and 'Calling On You'...In the old days we always had the heavy songs and then poppier songs. This is a merge of the two. It's got it all, and I think people are going to like it.

The "Pride" video, which features subtle nods to Stryper's black-and-yellow striped costumes of the '80s

Michael Sweet says about of the song 'Big Screen Lies' it's about how the film industry portrays Christians as complete buffoons one million percent of the time. And that's just not the case. It is sometimes, but those buffoon Christians don't represent all of us."

People who like to point and find the evil side, you probably already have thought criticize the song "After Forever," a Black Sabbath cover, but before they start, they should look at the lyrics of this song:
Have you ever thought about your soul - can it be saved?
Or perhaps you think that when you're dead you just stay in your grave
Is God just a thought within your head or is he a part of you?
Is Christ just a name that you read in a book when you were in school?

“Let There Be Light,” is a re-telling of God's creation story – a big, anthemic piece with middle-eastern sounding guitar phrases introducing the impressive solo break.

King of Kings is the last song on the disc, and is another masterpiece of this album, is also the favorite song of Michael Sweet from this new album. This song has a great guitar riff, and Michael Sweet sings with great intensity, the song ends with a amazing scream of Michael Swetet.

Tim Gaines said about of the new album: I refused to listen to our recording studio finished Until It was released today. Although I spent a week in the studio tracking the bass last year, and I received several months ago the finished master, I refused to listen Until It was released so I Could have a fresh ear. So, like many of you I am really hearing this for the first time and I am digging the vibe !! My favorite track so far is "Till I Get What I Need," but my favorites Usually change over time Especially when it comes to live performance. There are several others that i am looking forward to performing live next year. I hope you are digging the new album as much as I am. Can not wait till 2016 to hit the road!

Sweet said the secret behind the heavier sound to Fallen was the way in which it was recorded:

''We tracked everything through an analog console, the same one Maiden use, and it gave us a little bit of a beefier sound, so this album is a little bit bigger in the lower end than No More Hell To Pay . With the guitars usually we just mic the cabinet. This time we mic'd the cabinet and went in direct which made for a bit more of an in your face guitar sound.''

After more than 30 years, Stryper continues to have much notoriety, sounding better and better, not far from the great metal bands like Iron Maiden or Judas Priest, are showing that they are more than a band of Glam Metal of the 80s, leaving clear that they are one of the best heavy metal bands of the 80s and of actuality. 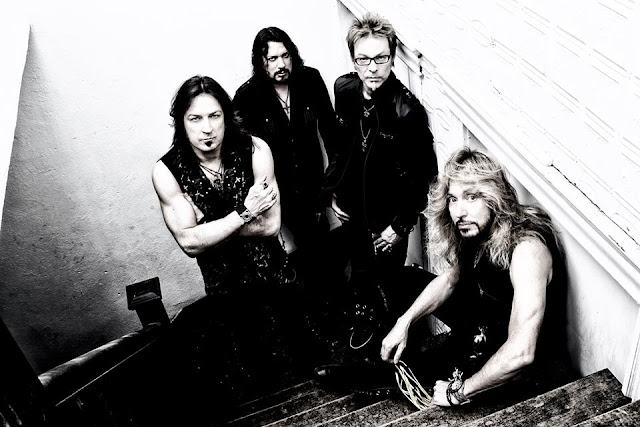