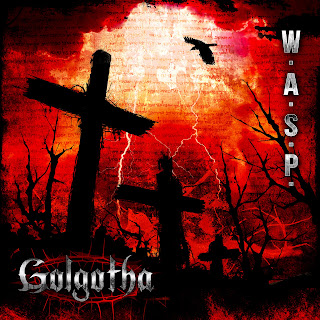 
The arrival of Golgotha is undoubtedly one of the most anticipated albums of the year for lovers of classic metal, W.A.S.P. fans, and also for followers of Christian metal.

WASP was one of the most controversial metal bands in the decade of the 80s. While  Stryper threw Bibles to the public, Blackie Lawless cut crude meat with an axe and then throw it to the public, also cut a pig with a samurai sword and drinking supposed blood, of a skull. While the boys of Bloodgood showed a live dramatization of the death and resurrection of Jesus, the boys of "W.A.S.P." they were simulating torturing a woman with bare torso and a black hood in a kind of torture rack and simulating cut head, and naked to a crucified nun.

But all this has been in the past, since 2009 things are different in W.A.S.P:

In 2010 Blackie said:"I was born again when I was 11 years old. I was very active in my church until I was 18, and when I left the church, I went about as far away as a person could go when I then studied the occult for three years. I wrote that song a couple of years after I stopped that study. I went for 20 more years before I returned to my Christian faith, which is where I am now. Although a lot of the music we did early on was as diametrically opposed to the way we had been brought up, a lot of the early songs we did were laced with those Christian valves. Alice and I were talking and said, all we need now is Marilyn Manson and we could start a band. The world would never believe it! I said all that to say this: I renounce, denounce and pronounce that I will never play that song [‘Animal’] live again. Actually, I’ve not played it live for several years.”

For many people can be amazing the new direction that Blackie Lawless has taken, give up their sins to be a born again Christian, reflecting their faith in the most recent WASP albums, Babylon(2009) & Golgotha(2015). "Golgotha" is a vigorous effort with a  guidance of the Holy Spirit giving his work more conscience and concentration, if "Eyes of My Maker" is no indication.

Blackie Lawless is an altogether new man playing the same tricks, this time with huge conviction. "Golgotha" (not wholly a concept album) is no different in structure than any WASP album you've heard before, but its girth, maturity and newfound virtue puts it leaps ahead of the band's most recent outings.

Even with the new faith of Blackie, Golgotha is a spectacular album and keeps the intensity on vocals and bass, killers riffs, characteristic of W.A.S.P. You can enjoy the W.A.S.P. intensity, but with a new direction in the lyrics of their songs. This is an album that you will enjoy from the moment you start listening "Scream" and you finish with the last song "Golgotha", you'll want to hear this album again and again.

In a recent interview giving by Ultimate Classic Rock to Blackie, they asked him the following question:

Many fans don’t always understand when their favorite musicians find faith. How would you say being a born-again Christian affected the overall creative and recording process of this album?
Blackie: Certainly, lyrically everything is written from the eyes of my faith, everything is through that filter. You’re also talking about a genre that, in general, is obsessed with the idea of God and/or the Devil. Jazz, pop, there is no other genre that is absolutely obsessed with it as this genre is. The Bible tells us, “The truth has been placed in the hearts of all men.” In other words, people know what the truth is. What I see is people in the search of the truth. They’re all on a journey, the people that are attracted to this genre are people who are really a lot more in tune with it than they think they are.
I’m speaking from a direction where I know what I’m talking about, I was in the church until I was in my late teens and when I left and came to California I went as far away as you could possibly go. I ended up studying the occult for three years. I understand what they’re looking for, they’re looking for the same thing I’m looking for. I’m at a point now where I’m bilingual: I can speak their language. They can’t necessarily speak my language but I can understand where they’re coming from.
When we say religion we kind of use that as a general term and when people have the resistance that they have to it they have every reason to feel that way. That’s part of what drove me away was the indoctrination of men that I received – it’s man’s indoctrination. Now from my perspective, my faith is based on Jesus Christ and the Bible, nothing more, nothing less. I don’t want to hear anybody telling me their ideas or their interpretations or interjections of what they’ve put into the Bible like telling me I can’t eat meat on Friday or I got to go and worship somebody’s old dead bones somewhere. That’s not in my Bible.
There’s a lot of it, every organized religion has it, every organized faith has it. That’s not where I’m coming from. When I left the church and then I studied the occult, I walked around for 20 years and thought I was mad at God. I realized after 20 years I was not mad at God I was mad at man for that indoctrination I received. For me I had to settle this issue once and for all because I am not going to walk around with this anxiety of what’s going to happen to me and where I’m going, I got to know the truth. I got the Bible and I started reading and I thought I was going to disprove this thing once and for all.
Everyone says the Bible is written by men but the Bible says it was men who were directly inspired by God. But I didn’t believe it for a minute.  So I start reading and I start discovering and you have 66 books written by 40 different authors spread over three different continents, in three different languages, over a 2,000-year period. Most of the authors did not know each other, had no knowledge of each other but yet I see consistently that they’re not just answering each other’s questions, they’re finishing each other’s sentences. It was mind-boggling, the deeper I got into it and one day it hit me like a shot. I’m reading the living word of a living God. After that I was just scratching the surface then when you get even deeper into it, it’s beyond comprehension.
I cannot say it strongly enough. It is beyond impossible that it could’ve been written by men. I’m a writer and even the writers that I know that I admire – I look at how we write, I know what our limitations are and like I said it’s so far beyond our comprehension.

Lawless previously stated about the making of the Golgotha CD: "The rehearsals for this album started in the spring of 2011. A lot of time was spent just talking about the direction of the songs and really trying to turn the songs inside out to see exactly where they wanted to go.

"One thing you learn over the years in the songwriting process is that after the songs begin to take shape, they will eventually start to talk back to you and they will tell you where they wanna go. The trick is learning to listen when they speak.

"This process of writing and arranging and the demos went on for several months before we even began to record the album for real.”

Regarding the previously released song "Last Runaway", Lawless said: "Forty years ago I came to Hollywood as a teenager. Terrified and scared out of my mind, I had no idea what waited there for me. The song “Last Runaway” is an intensely personal account of what happened to me, not only then but over the years and the success that followed after. Be it a kid looking for success in the music business or any life-challenging endeavor that someone would 'run away' from in life, I'm certain that everyone can relate to this story one way or another. It's another kid 'chasing the dream' and trying to survive it in the process. We've all been there."


At the 2014 edition of the Sweden Rock Festival in Sölvesborg, Sweden, Lawless stated about the lyrical inspiration for the new W.A.S.P. CD: "'Golgotha' is Hebrew for place of the skull, and it's the hill where Christ was crucified. And it's interesting, when you see a lot of bands going around using Satanic images or images of death and things like that, and I'm thinking, all they need to do is look at the source, 'cause it's right there. I mean, if you want death, there's enough to go around there."