Bob Wall, Born August 12, 1948 on Burbank California, passed away last December 23, 2015 to 67 years old, as he flew from Los Angeles to New York to see her daughter and grand kids.
Medical details are still unknown, but Bob was in fairly poor health for the last few years.


Bob grew up in semi-rural Tujunga, California on the outskirts of Los Angeles.  He fell in love with guitar music at an early age and founded several rock bands in the middle1960s, including three bands that were signed to recording contracts.

Then he met Jesus, Freddie Piro and Love Song, in that order.

He joined the band Love Song in 1971. He played in the last concerts of Love Song in recent years with his oxygen tanks on stage. He was not able to stand for long periods of time so he did the gigs in a sitting position.

"I'm heartsick to tell all of my Dad's followers that Bob Wall passed over into heaven today on his flight from LA to New York to spend Christmas with his daughter and his two grandchildren - Jack and Taylor. I know he is now with the Lord and finally at peace - but we will miss him greatly"

It is with heavy hearts that we acknowledge the death of our dear friend and band mate, Bob Wall.On December 23, Bob died on the very flight that was to take him to his loving daughter and grand kids.He was a guitar player along lines of George Harrison of the Beatles. His guitar parts were always uniquely crafted to fit the song. He was not a "flash" player, but wanted to play what ever would best showcase the song, and support the group. But he could certainly play with aggressive  fervor when the time came.His unique humor could lift the mood of the whole room.He didn't chime in much at group meetings, but when he did we listened. On the rare occasions where he spoke from the stage, his candor was refreshing, and his point was always penetrating.We don't know the medical details yet, but Bob was in fairly poor health for the last few years.He was a trooper always. He played our last few gigs in recent years with his oxygen tanks on stage. He was not able to stand for long periods of time so he did the gigs in a sitting position, but always brought what we came to call the "wall of sound", delivering his unique guitar playing with full passion. He is already greatly missed. Our loss is Heaven's gain. 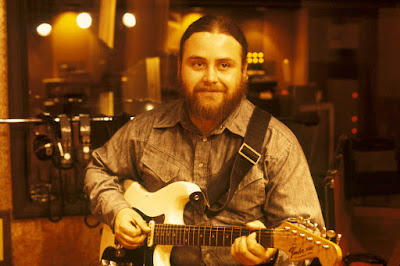 BOB WRITES:
When I was 11 years old, my favorite uncle, James Wall, gave me an old Kay flat-top guitar.  On it, I learned my first chords and songs and got hooked on music.  Not too long after, Uncle Jim bought me an old worn out 1953 Fender Telecaster on which I really got serious about playing.  I soaked up all Three Kings (Freddie, Albert and B.B.) and the Ventures and Dick Dale, followed by The Beach Boys and The Beatles.  In my middle teens, what you did was get the record, play it a million times, figure out the chord patterns and memorize the lyrics.  In those days, when a kid heard, “You sound just like the record” it was taken as a compliment.

My friends and I started bands from the age of 15.  Three of the bands I started got record deals over the next five years:  Sean and the Brandywines, The Badd Boys and Houston Fearless.  If you look really hard it’s possible to find old records out there, but they weren’t very good.  By the time Houston Fearless broke up I was married and had a baby daughter and I made what was the ultimate sacrifice in the mind of a twenty-one year old musician.  I went out and got a day job.  Killing bugs in Beverly Hills.  That didn’t last too long. 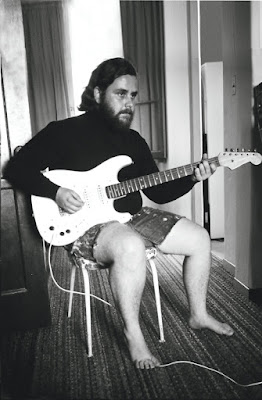 Personal issues and vast differences in our backgrounds were largely responsible for my wife and I separating.  She was in no condition to care for our daughter and I found myself without a home so, temporarily I thought, I placed my daughter Suzanne in a foster home until I could get settled.  This was the lowest point in my young life.  I literally didn’t own a decent pair of pants and when I landed a job in a North Hollywood tape cassette factory the boss gave me $20 to go buy some.

Freddie Piro was the owner of Mama Jo’s Recording Studio, and was a friend to many of the musicians I hung out with.  Unfortunately for Freddie, and VERY fortunately for me, some bad guys had kicked in the door of his studio and stolen the main 8-track tape recorder.  Since he couldn’t replace it right away, Freddie let me sleep there.  It was warm, dry and quiet.  My friends would come by and jam some nights, but mostly it was just me, sleeping under the piano – or reading the Bible.

See, I was raised in a church.  Not a great church, but a real church.  Its doctrines were very strict:  no movies, no dancing, no makeup, and no rock ‘n roll – in other words, no fun.  So even though I had believed in Jesus since I was a little kid, I never really signed up for most of the religious dogma being hollered from the pulpit in that church, and the only real reason I went there was because of my mother.  When she and my dad split up, all four of the Wall kids stayed with my dad and that was the end of me and church – or so I thought.

So there I was, being alone, writing God songs on Freddie’s piano, mining solace from the Psalms and somehow feeling I was destined to be part of something special.  I had no idea how special, or how soon.

One day, the door opened and in walked Freddie Piro.  “Hey, Bob,” he said, “You’re a Christian now, right?”  I said yes.  He said, “You know that new band I was telling you about in Orange County called Love Song?”  I nodded.  I had heard about them from Freddie and from other people as well.  I even knew one of the players, Chuck Girard, as a few years before we shared a common record producer who brought Chuck in to sing on one of my band’s records. 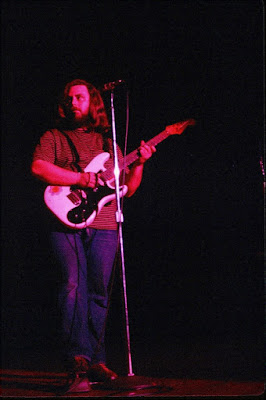 “Their lead guitarist and drummer have gone off to start a different group and they need replacements.  Want to audition?”

I wanted to jump up and down.  Instead, I told Freddie I would have to pray about it.  He said, “Well, they are playing a concert this weekend, just the remaining three guys, at the Long Beach Civic Auditorium if you want to go hear them play before you decide.”  I gathered up some friends and went to the concert.

I listened to songs like Feel The Love and Maranatha and Little Country Church and realized that musically I could fit in to what they were doing.  I was a bit put off by the instant notoriety that would obviously come with involvement, but what I really needed was a push.  From God.  Outside the Civic, long since torn down now, was a set of concrete steps leading down to a lagoon that was part of a new development project.  With the concert still going on inside, the area around the steps was deserted so I walked down toward the water and sat down on the last step.  I put my face in my hands and prayed, “Lord, if you want me in that band, You will have to take care of my little girl.  You will have to carry me in places where I will fall.  And I will need you to give me a sign.”

As I finished praying I opened my eyes and there before them were my two hands.  My favorite of Love Song’s tunes that night was Two Hands and I was reminded of it as I looked down at mine.  The Holy Spirit spoke to me, in stereo, right in the middle of my heart,”I gave you those.  Use them.”

Within a week, I was at Freddie’s beach house in Malibu with Love Song.  All those days of listening to records and learning to play and sing parts were soon to bear fruit.

As has Love Song through the years, thousands of people have blessed us with stories of how their lives have been enhanced by our music. 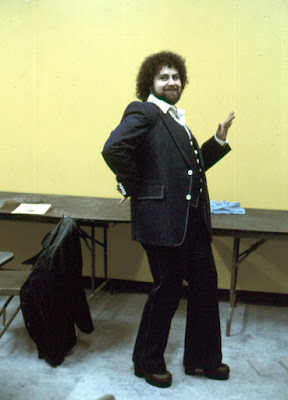 I stayed with Love Song full time until just after the Final Touch album was finished.  I felt like I needed to stay closer to home and work toward the ultimate reuniting of my daughter and myself.  About a year after I had joined Love Song, my former wife had died from a drug overdose.  I was never questioned or informed of any proceedings, but there were legal steps taken by my wife’s parents to prevent me from receiving custody of my daughter.  Apparently, I had been classified as “itinerant” and an “unfit parent”.  Even though this was not true, the best I could do was to stay involved in Suzanne’s life to the degree I was permitted to do so.  Now, she is an adult, is married to a great guy and has two terrific kids, and has a career with a large American insurance company of more than twenty years.  Our relationship is one of my most cherished possessions, even though it is a long way from my house in California to hers in New Jersey!

Remember killing bugs in Beverly Hills?  After Love Song got Phil Keaggy to replace me, I went back into the bug business with a nice lady I had known since fifth grade and her husband.  We sold the company in 1990 and stayed on in management.  In 2004 I bought the company back along with two of its other managers, and we still own it today.  I work there part time, doing accounting and computer chores.

I also keep my hand in at various local churches as a fill-in guitarist in worship bands where I get to play all the great new songs out there.

And as punctuation in my life, every so often -- as if to remind me that I didn’t dream it and Love Song really happened all those years ago -- the phone will ring or an email will arrive and Love Song will be on again, for a month, or a week, or a few days or even a single concert.  It is always a blessing and a pleasure to once again be with my brothers and play and sing those special, anointed songs.

This was written by Bob for the website of Love Song, Bob is now with his Uncle Jim and Jesus.
God bless the family of Bob and his friends. 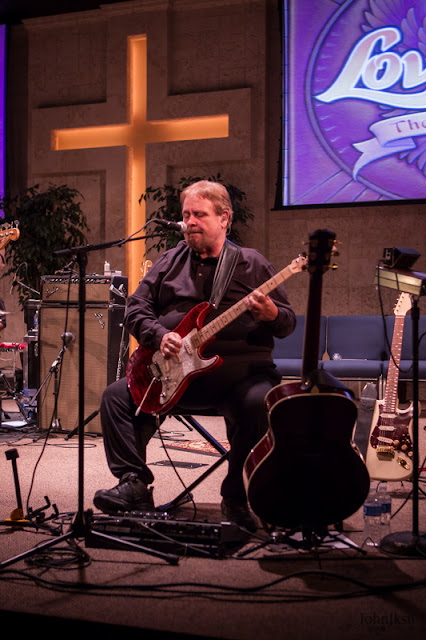 Recalling a special Bible passage:
For to me, to live is Christ and to die is gain.
Philippians 1:21