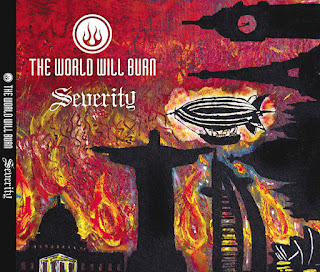 When Bride released their last album "Incorruptible" in 2013, we believed that never again we would hear the powerful voice of Dale Thompson, considering that Bride was saying goodbye with this album,  Dale was to live to New Zealand and he married in 2014 with his beautiful wife Adeline.


In an interview we did with Dale in 2013, Dale told us that he had plans to start a band in New Zealand. Over time, we did not know anything about this band. Until September 2015, Dale said it had a new musical project called "The World will burn."

"The World Will Burn" is a band a little unusual, is composed of only two members, Dale Thompson who lives in New Zealand and Alan Zaring living in USA. They have worked remotely to start this musical project, the result is the album "Severity" a great music collection, made by two people living to thousands of kilometers away from each other.

Alan Zaring is a multi-instrumentalist who has been a part of numerous projects of all genres through the years.  He has focused his efforts into the music of his passion, heavy, hook-filled, guitar driven rock.  Alan plays or programs all of the instruments on this album ... (That sounds good.)

Despite having good guitar hooks and a powerful voice, I feel there is similarity between some songs on this album. That does not mean that this is a boring album, at some point the metal evolves, and this album is proof of that, it's a very different, more futuristic sound, at least for those who are accustomed to the music of the 80s and 90s.

| My vocals are the heaviest I have ever recorded with slaughtered screams, heavy airy backgrounds and guttural intentions that will raise the hair on the back of your neck. Yeah I am very happy and positive that if you are a fan of "the heavy" you are going to dig this crunchy roll of slambastic groove and wonderstruck." | - Says Dale Thompson.

Songs like "The More Things Change," "Mad Men", "No One Wants To Die" (My Favorite), "Place in the sun", and "Torment" show a great musical energy, putting proves once again the vocal capacity of Dale .

The album cover is a painting  made by Dale Thompson, where they represent emblematic places from around the world that are on fire. At the same time also it represents the name of the band "The World Will Burn".
Facebook Twitter

The World Will Burn