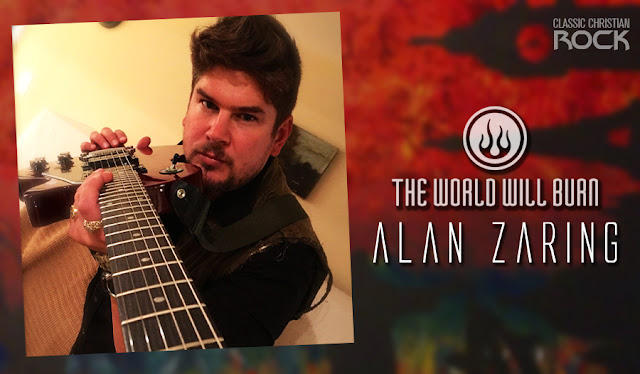 A band a little unusual, a mixture of something classic with something modern, a legendary guy in the Christian metal, along with a little-known guy, that's The World Will Burn, the new band of Dale Thompson and Allan Zaring.

We all know who is Dale, the screamer of Bride, who also sang a few days with Stryper, etc etc. But we know very little of Alan Zaring, the other guy from The World will burn.

Ok lets go to know more about Alan with this interview we have made:


CCR: ​We all know who is Dale, but talk us a little about yourself, what is your musical past?
Alan: First, let me thank you the the chance to talk about The World Will Burn to your readers.  As an independent band, spreading the word is important.  CCR is a great forum for us and many other bands.

I am just a farm boy from Kentucky.  I live in the same town where I grew up.  That town just happens to be close to the city where Dale and Troy Thompson grew up, so I have known them since they started Bride years ago.  I have played in all kinds of bands in the past, mostly rock, but other types of music as well.  I play a lot of instruments, but none of them very well.  Everything from jazz saxophone to guitar.  I doubt your readers would have heard of any of my other bands, they were mostly local.


CCR: ​How did the idea of forming a long-distance musical project with Dale?
Alan: I think Dale and I are still amazed at how it happened.  In 2013 I played a small part in helping Bride record their last album, INCORRUPTIBLE.  I have always been good friends with Troy, Dale’s brother, and introduced some of my friends that are great musicians to Troy and Dale and they ended up playing on INCORRUPTIBLE.  Most of the arranging happened in my basement.  I recorded the rehearsals and generally helped out when I could.  During the process, Dale and I hit it off and become better friends, even though we had known each other for a long time.  As most people know, Dale eventually moved to New Zealand, but we stayed in touched.  I was figuring out some new software in my home studio and writing songs, but couldn’t find anyone who could write lyrics and sing them to suit me.  I wasn’t really planning on doing a major release, just more of a creative project.  I send a few songs to Dale to see if he might be able to at least write some lyrics for me, and it happened at the perfect time.  Dale had really been looking for a new project but had not found anything that really excited him, and really loved the songs and sound I was getting.  It was an instant match.

I remember hearing the first song Dale sent back to me after he wrote the words and sang to the music.  It was completely magical.  Really, we got lucky to find each other at the right time.  My music and Dale’s words and vocals fit together like a glove.  Dale and I are both pretty prolific, and we cranked out songs really fast.  It goes quickly when it is meant to be.  The songs really wrote themselves.


CCR: Tell us about the name of the band, what is "The world will burn”?
Alan: Actually the name of the band doesn’t need to have a deep meaning or anything, the most important thing is that it expresses some statement and gives a foreshadowing of the music we play.  We had dozens of names in mind, I narrowed it to three, and Dale picked the name.  I think a Facebook friend of his had first suggested it.  The name is consistent with 2 Peter 3:10, and with all the chaos in the world right now, it just seemed fitting.  Everything is getting crazier and crazier.  We are moving further from our Creator than ever.  So fire, even though it is destructive, is also a cleansing agent.  Fire destroys, but after the flames, it creates.  New life thrives.  I think if our name means anything is is that we need renewal.


CCR: How is the experience recording the album "severity" while you and Dale are living in different countries?
Alan: It was crazy!  I had just really gotten my studio the way I wanted it and Dale had very little experience with the technical side of recording.  We were the blind leading the blind.  Believe it or not, most of the album was improvised.  When I was inspired, I would go to the studio and the music would come to me very quickly.  It was extremely exciting.  I would start with the main guitar hooks, which are very important in my writing, and record drums, bass, additional guitars, and in a few hours I had most of the song finished.  Dale and I would tinker with them, and I even when back and tried to re-record a few of them.  They were cleaner, but they were missing the emotion and excitement that happened the instant these songs were born.  We chose passion over perfection.  I really believe you can feel the excitement in the songs.  Dale was struggling with his equipment  and software.  He would write the words and then had to record most of his vocals on the first take because of all the glitches he was dealing with.  I love that fact, and the whole vibe of SEVERITY is really emotional and powerful and honest.  Despite the way it was recorded, we had an excellent engineer who really make SEVERITY sound amazing.  The production value is off the charts.  We couldn’t be happier with how it turned out.


CCR: How would you define the musical style of "The world will burn”?
Alan: That is a most difficult question.  I think everyone has to figure that one out on their own.  Both Dale and I were burned out with most of the metal that was being released.  Other than a few little details, 90% of the music could have been the same band.  I get it, bands want to make music the listeners want to hear, and the follow the formula that the populars bands were using.  We wanted to be heavy but completely different.  Remember all of your favorite classic rock bands?  They are massively heavy but don’t have growling singers, continuous blastbeat drums, and 10 guitars shredding simultaneously. I took a lot of time to listen to the classics to figure out what it meant to be heavy without being noisy.  And hooks!  So many great guitar players can play circles around others but can’t write a hook to save their lives!   So I focused on big, mean, heavy hooks.    I also wanted to be very modern.  I have a lot of tuned down guitars and 7 string stuff at times.  So basically I took the best of classic rock and the best of modern metal to create a new heavy sound that really grooves hard.  Dale’s vocals are legendary, and no one is heavier than he is.  He doesn’t have to growl to be metal.  Dale is metal in his sleep.  He is a A1, top dog, alpha predator male front man.  When he sings you KNOW he means what he is saying.  He just kills the vocals throughout the album.  His fans are going crazy over it.


CCR: When will  meet with Dale?
Alan: I hope soon!  We have been in contact almost daily for the past year but I haven’t personally seen him since about 2013.  That’s nuts.  I hope he gets a chance to come back to Kentucky this summer.  I would like to meet his wife and Troy and I and the old gang can get together.  I also would like to visit New Zealand.  I hear the fly fishing is terrific.


CCR: When shall they do first concerts?
Alan: Touring would be almost impossible.  If The World Will Burn continues to gain momentum and grow like it has been, I don’t think we can count it out.  I have some great players in mind that could jump right in and we could pull it off.  One problem is how scattered our fans are right now.  We are growing rapidly in South and Central America, Northern Europe, and Indonesia. That would be a strange tour schedule!


CCR: What are the plans that you and Dale have done to TWWB?
Alan: Dale and had an absolute party doing SEVERITY. It was so much fun I really think we will do a follow up.  We loved doing it, but we are a new band without a label so it was possible no one would hear it.  It has really taken off and surprised us both.  And the momentum continues to grow.  Once people hear the music, they love the fact that it is different and heavy at the some time.  They tell their friends, and it grows.  We really owe it all the the people that are spreading The World Will Burn by word of mouth, blog, and social media.  We are grateful.  If the fans want another album, Dale and I won’t need a lot of persuasion.


CCR: What is the purpose of "The world will burn”?
Alan: Dale and I really did it to be a creative outlet for our talents.  It has grown into its own now.  It is still growing.   Who knows where it will end up.  If we accomplish anything, I hope we push heavy music in a more creative direction, entertain our listeners, and take them on a journey that is both enjoyable and enlightening.


CCR: Thanks for the interview Allan, I hope  hear more music of TWWB soon, God bless you.
Alan: Yes, and thank you, Anthony!  I can’t tell you how much we appreciate the exposure.

The World Will Burn