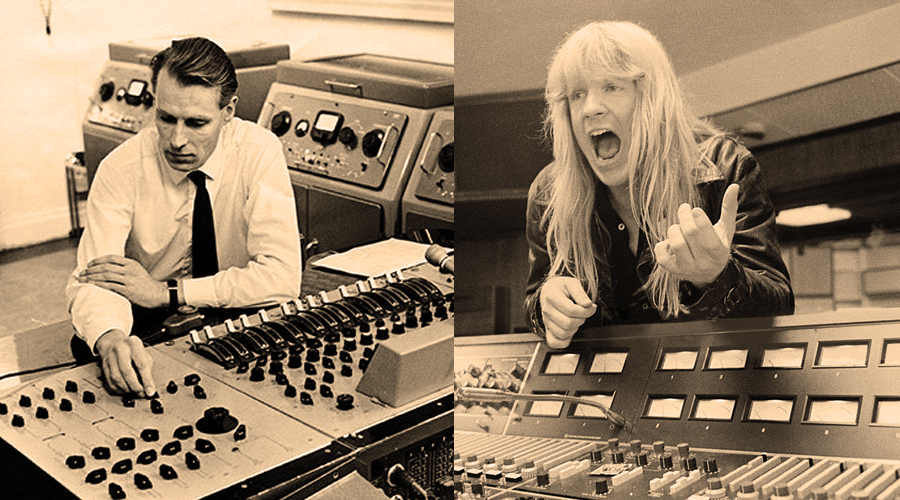 Sir George Henry Martin CBE (3 January 1926 – 8 March 2016) better known as simply "George Martin" was an English record producer, arranger, composer, conductor, audio engineer and musician. He has been referred to as the "Fifth Beatle", including by Paul McCartney, in reference to his extensive involvement on each of the Beatles' original albums. Martin had 30 number-one hit singles in the United Kingdom and 23 number-one hits in the United States.

Within the recording industry, Martin is known for having become independent at a time when many producers were still salaried staff—which he was until The Beatles' success gave him the leverage to start, in 1965, Associated Independent Recording, and hire out his own services to artists who requested him. This arrangement not only demonstrated how important Martin's talents were considered to be by his artists, but it allowed him a share in record royalties on his hits. Martin's Associated Independent Recording (AIR) remains one of the world's pre-eminent recording studios. Martin later opened a studio on the Caribbean island of Montserrat, in 1979. This studio was destroyed by Hurricane Hugo ten years later.

George Martin not only participated with the Beatles, also worked with artists such as Elton John, America, Kenny Rogers, Cheap Trick, Celine Dion, and also with Larry Norman. Yes, Larry.

It was in AIR Studios, when Larry Norman began recorting "Only Visiting This Planet" on September 8, 1972, possibly the most important and best album in the history of Christian Rock. Again and again this album features in lists debating the best Christian album ever made. It topped CCM's 1988 best 25 Christian albums survey and then came second
in their 1998 poll.


"I recorded the album at George Martin's studio and used players from King Crimson and The Average White Band and other English groups. There were no problems making this album. “The first day we recorded there was a bomb scare and we all had to leave the building”.


The album was initially released on the Verve Label in the US and on Metro Goldwyn Mayer in the UK.

Billboard listed the album among its special merit picks and said "there's one song on this LP which puts it firmly on the map as an album to be reckoned with - 'Reader's Digest'. The song is sort of a dissertation discussing everything from Alice Cooper and Bowie to the Rolling Stones and warrants heavy Top 40 airplay". They added "Larry Norman is probably the most important songwriter since Paul Simon". The New York Times called him, "Christian Rock Music's most intelligent writer and greatest asset".

On August 7, 1973, Larry Norman returned to the studio of George Martin to record "So Long Ago the Garden".


'So Long Ago The Garden' was a difficult album to record. It
was fun, too. Paul McCartney was in the other room recording "Live and Let Die" for the James Bond movie. Brian Eno was in Studio C with Robert Fripp making an avant garde album. But MGM was pressuring me not to make another Christian album and my manager started doing drugs and emptying out my bank account and the arranger was trying to make "She's A Dancer" into a totally different song that what I wanted it to be.

But the "Nightmare" song came out perfectly balanced and "Lonely By Myself" came out really nice with that Mellotron effect. We had to lock all the doors when we recorded it because in those days the Union declared the Mellotron illegal. Even The Beatles had to lock up when they recorded "Strawberry Fields Forever" and "I Am The Walrus" with the Mellotron or tape samples because you could get in big trouble for not using real musicians and the Union could blackball you so that no string players would cross the line and record with you. No horn players. Now it seems funny, but in those days if one Union got on your case they could tell other Union men not to light your Albert Hall gig, not to give you any electricity, not to pull the curtains open. And if you couldn't play Union houses all that was left was grungy non Union pubs and clubs.


Produced by Jon Miller, Rod Edwards and Roger Hand of Triumvirate Productions and co-produced by Larry Norman for Street Level Productions. Mixed by Tony Scotti and Larry Norman for MGM Records. Recorded in AIR Studios London during August and September 1973, this album made recording history as it was the first to be recorded in England on 24 track.

Both recording "Only Visit This Planet" as "So Long Ago the Garden", George Martin used some instruments of Beatles recordings, in fact for the song "Lonely By Myself" Martin took the same "mellotron" used in the song "Strawberry Fields Forever" of the English band.
Facebook Twitter