Skateboard supremo, Tony Hawk, probably didn’t have Stryper in mind when he stated, “I believe that people should take pride in what they do, even if it is scourned or misunderstood by the public at large”; however a similar thought has probably crossed the collective minds of Stryper for over three decades.


Throughout these years Stryper has remained the flag bearer of the Christian metal scene, denizens standing resolute against all things antithesis to the yellow and black attack.  Yet rather than shying away from the establishment, Stryper has remained firmly in the world, but not of it - as was the case tonight which found them playing the AVI casino.

It is this dogged resistance to capitulate, coupled with talent by the bucket load, that has gained Stryper unparalleled respect across the metal scene.  In fact so healthy is the regard for lead man, Michael Sweet, that after the sad passing of Boston stalwart Brad Delp, Sweet was invited to join the rock royalty, not just wielding his guitar but handling lead vocals on half of the set.

Fast-forward to summer 2016 and Stryper are on the road again, complete with original line-up, which Michael alludes to early on in the set as being a rare commodity these days. However tonight they graciously take second billing to Skid Row; something that many present feel is an anomaly, demonstrated very visually by Stryper tees outnumbering Skid Row’s by a good five to one.

The spandex yellow and black outfits may be missing, but all other trademarks are present and correct.  The sound is clear and crisp; bibles are thrown respectfully into eager outstretched hands and the tunes are quite simply that – tuneful.  None more so than the joyful opener, Sing Along Song that sets out the Stryper stall for a full hour of master craftsmanship.

King of Kings is a declaration that doesn’t make any attempt to hide its message, asking directly, “Do you believe in God?  Do you accept His mercy?”.  The message is not simply about God however; it’s also a celebration of music and of life itself, as demonstrated by their cover of the Kiss classic, Shout It Out Loud, a Stryper favourite that appeared on 2011’s The Covering album.

Co’Mon Rock reinforces the intent behind their continued touring; “We're rockin for the Rock, and I know we'll never stop; and we will never be ashamed.”  It’s a bold statement, despite Michael’s assertion that he doesn’t regard Stryper as a Christian band, but rather a band made up of Christians.  It’s a fair point and one that could potentially bring a new generation of fans if the myopic element of the metal scene could put aside their labels.

Oz Fox carried off the fretwork with his usual consummate ease, trading solos with Michael and willingly donning a Dodgers baseball cap thrown on stage.  In fact it was a night of exchanges; tossed plectrums, bibles and drumsticks; friendly fist bumps and a joyful celebration of all that is good about live music – Christian, secular or whatever label anyone wishes to employ.  There was even a heartfelt invitation from Oz to drop in on his wife’s Vegas charity that provides outreach and rehabilitation opportunities to street workers.

The rousing Soldiers Under Command medley was preceded with the announcement that Stryper will be back on the road this autumn, yellow and black spandex et al., to celebrate the 30th anniversary of the Grammy award nominated To Hell With The Devil album.  On the evidence of this concert it was a message any wise man or woman would do well not to ignore.  Tonight’s double bill was a one horse race.  Thankfully, for those making the trek across the desert, we had witnessed a thoroughbred. 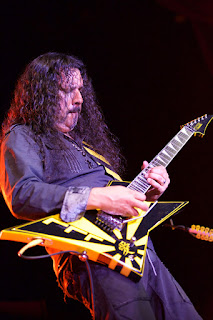 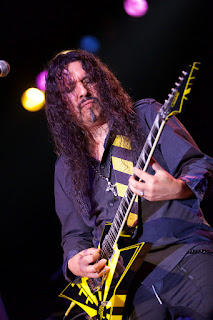 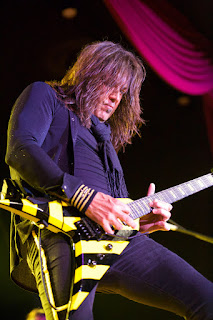 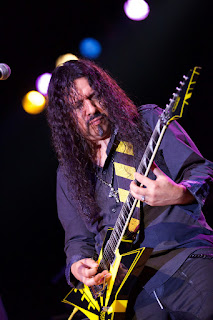 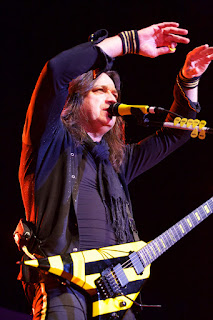 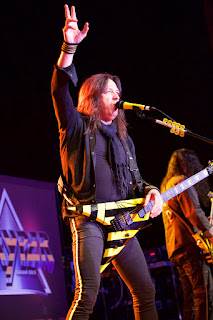