One day the lead singer, Gilberto Alomar, spoke with his mother, a Christian woman and request to her to pray for him because he want to received Jesus as his Saviour. After that he decide to visit a Mission Board Church with his brothers and they all became Christians that day.

They left the TV Show and with the time they also left that church and rise their own. But they never abandon the music and  they started writing Christian lyrics with Rock and roll, in 1971 at their home they did the very first 45"RPM with 2 songs "Alegrate Joven" and "Como un Niño", recorded with a Ampex Mono, decide use the name of "Mana Peniel" (Mana: What is This? - Peniel: The face of God). They took the name from Exodus 16:15 and Genesis 32:30.


At the end of 1971 was recorded "Un Nuevo Amanecer" with their own equipment, a Mono Ampex, and again they became popular in Puerto Rico. A Christian producer contacted the band and they did "Cristo Paz y Amor" at Echo Sounds Studios together with sound Ing. Johnny Blanco and Jorge Ortiz for Roka Records in 1972. Time after, they re-released the first album of Mana Peniel (nuevo amanecer en Cristo) with a diffrent cover.

The group's popularity continued to grow among young people that knew the band as Sunset and now with the new name "Mana Peniel". In 1973 they decided did a live album in "La Casa Del Joven". They rise founds to build the place. "La Casa Del Joven" was a place for the college students where they did meeting to do Christian services.

The band played in any place they was invited, including Catholic Churchs, Evangelics, doesnt matter, they preached the message where God sent them. In 1973  they decided did another album with Roka records, "¿Quién Dirige Tu Vida?" recorded with Echo Records, 8 Ch Scully, with the Ing know as Jaime, and the cooperation of the Missionaera "Clementina Souffront" and Jose Rivera on Percussions. 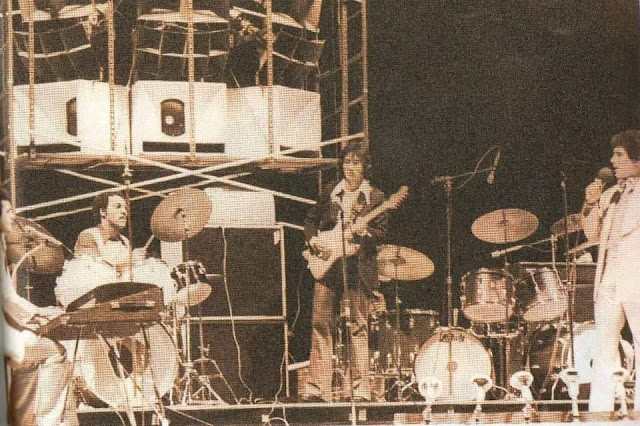 Mana Peniel played with many Christian and secular rock bands of the time, one of them was "Holocausto" a progressive rock band that also recorded with the same record label in 1974. On that year, they debuted in an event called "Rock stock in cayey",  in which also played "Mana Peniel". That event was recorded.


Yes is the very first independent or bootleg album. I show this one to Mr. Alomar together with his brother Hugo just few days ago before I wrote this note and they unknow that this record exist but they enjoy every song. The sound is not very good, because it was a cassette which was transferred to CD, but you know, the side B on a casseette not always have a good sound. - David CrossChildhild -


Angelo Alomar decides to leave the group, and the band changed the name to "Gilberto Alomar & Mana Peniel," the band takes a new turn when recording a new production (self-titled album) in 1975 with "Richie Ray & Bobbie Cruz", music singers of salsa (a Latin music genre), who also had given their lives to Christ.


Eventually, several recording of artists of Salvation Records, became the property of "Roka Records", including this historic piece in Puerto Rico, and I would say that the most important of the 70's (In Puerto Rico), because joined two music genres completely different, not only in the recording, but also in concerts where both groups were presented. Roka bought all records for Salvation Records - David CrossChild -


In 1978 they played at "El Morro" Concert with the secular local rock bands "Pelican In Flight" and "Bandus, a massive free event at the Castle "San Felipe del Morro",  this was one of the few activities that was did on that place, a fortification buid with more that 500 years.  This activity also was recorded and you can see it at YouTube, unfortunately this video cassette was transfer to DVD very late and the recording is a little damaged.

In 1979 Gilberto Alomar was so famous in Puerto Rico, that was invited to play on a record with Ednita Nazario, he was playing guitar on the album "Retrato de Mujer". He also wrote and produce a young rock band called "Coqui", he did this band with some Puertorrican young guys that lived in Boston and they were contemporay with the secular musical group "Menudo" with whom they shared the stage many times.

Between 1981 - 1985 Gilberto Alomar & Mana Peniel was living in Boston, and in 1983 they finish the last record "Back To You"  (Regreso a ti) recorded in Newburry Studios. This last one, was not very famous than the previous album "Gilbert Alomar & Mana Peniel", some people called this one as a Gilberto solo album because on those days the original Bass player Reimundo Cotto Rivera left the band and Mr. Benjamin Yemina Concepcion took his place. in this moment only his brother Hugo and Gilberto, was the original members on the band.

Gilberto Alomar played in the song "¿Ahorake? on the CD "Union" of the band  "Puya" in 2001. For years, he also was know as "The Evidence" a tribute Jimmy Hendrix  Band, wich one he played in several countries.

I knew the Alomar Brothers in 2009 with the curiosity to know more about Mana Peniel, because I just knew their music and have all the records in my hands,   a friend of mine took me to a place close to the Universidad de Puerto Rico to see the band "The Evidence" and I was very impress to see how many people follow this band, on this place I kew Gilberto and his brother Hugo. I got to know to Angelo on the same year but in a diffrent place of Puerto Rico because he live in United States and he was visiting the island, so we can do a meeting with him.

Angelo Alomar return to Puerto Rico in 2015 and he decide to record the song  "Asi Es La Vida" with his brothers,  eventualy Giberto and Hugo recorded a few more songs  and they presented to me. I decide to do a EP called "Asi Es La Vida" because this song impact to me so much that I decide that this will be the title of this production. The master was lost because the machine they used to do the disc was broken and also 1 song was lost for ever, they need to record that song again. They show me 6 songs and only 4 was selected to this proyect and with the help of Mr. Victor Daniel from the band "Bella Stella" who did the masterization.

About the masters of all the previous Mana Peniel albums exists a big mistery, some people said that was burns on a fire at the Roka Records place and for this reason they were never released on CD, but in 2009 I personly talked with Mr William Arnaiz before he pass away and he confirmed to me that the masters exists, he show me several boxes with numbers and he informed to me that advice Mr. Alomar to returned to him when he can but this never happened, so, I transfer this to mp3 and did the masterizaton the best that I can. I hope one day finally the people can enjoy in a digital format the music of Mana Peniel. -David CrossChild -