The year was 1989, the band was hot and garnering rave reviews from their debut album ‘Rebellion’ released the prior year in 1988 via Intense Records. Everyone’s expectations were high waiting for the band to unveil this one, their sophomore effort, and it did not disappoint!

By the late 80’s the Christian metal movement was really beginning to grow. Bands like Bloodgood and Stryper were already very popular on the scene. However, most new bands were either moving towards the popular thrash or pop metal sounds. There were very few Christian bands exploring the melodic and progressive style of bands like Queensryche, Crimson Glory and Fates Warning, but Sacred Warrior did it, and they did it very well!

‘Master’s Command’ was originally released in the Summer of 1989 on Intense Records to rave reviews and critical acclaim. The original release was pressed on CD and cassette only throughout the US with a very limited pressing on vinyl that was only released in Europe. With the resurgence of vinyl, and the limited quantity of this LP originally pressed in Europe it is very hard to find, and if found fetches high dollars on sites like eBay and Discogs. Even the CD pressing can prove difficult to obtain at a decent price these days.

Roxx Records announce a very special, and very limited, remastered and reworked version of Master’s Command that will be officially released on April 14, 2017. This special edition features revised artwork that holds true to the original classic album cover courtesy of Scott Waters (Ultimatum, Roxx Productions, No Life til Metal). As well, the CD and vinyl versions were compiled and completely remastered for CD and vinyl by Sacred Warrior’s very own Steve Watkins. Officially licensed through Meis Music Group.

There will be a limited vinyl pressing of only 300 pieces made available, 100 pieces only will be on a translucent blue vinyl, while the remaining 200 will be on black vinyl. By overwhelming request, Roxx records, announce will also be releasing a limited edition CD pressing in a very special digipack version. 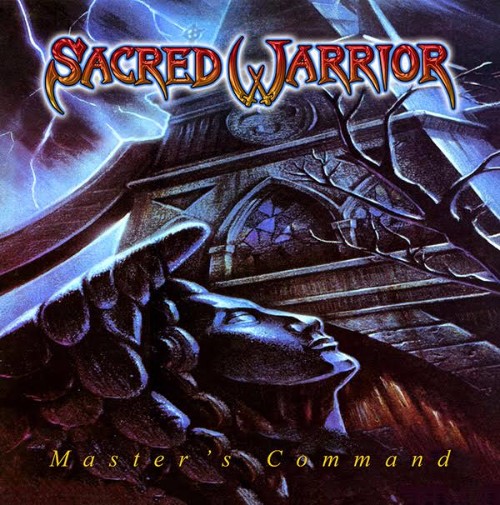