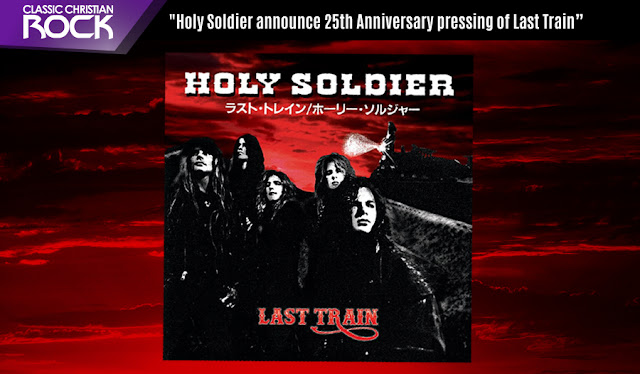 Roxx Records has announced the reissue of the second album by one of the most emblematic Christian hard rock bands, Holy Soldier.

Holy Soldier burst on to the scene in 1985 formed by bassist Andy Robbins and guitarist Jamie Cramer, at one time the band held the largest attendance records at Gazzarri's, a notable nightclub in the Hollywood circuit. In 1990 the band would release their debut self-titled album which would draw quite a bit of attention and success to the band. But with this release, Roxx Records are celebrating the band’s second sophomore release Last Train which was released in 1992, 25 years ago this year!

For this special celebration, they are giving the release a very special Roxx treatment, starting with a complete and new remaster done by Cliffy Huntington, who mastered the release for vinyl and CD. The frontcover has also been updated, however keeping the integrity to the original pressing, this new representation and layout and design was done by Scott Waters (Roxx Records / No Life Til Metal)


“‘The Last Train’ shows a band at the peak of their prowess. With grit and determination Holy Soldier shows that they were not followers in a narrow glam scene but were an exceptional hard rock act that worked hard to create a unique sound that deserved more recognition than they received. All the years slugging it out in the L.A. club scene were not lost on this talented five piece, producer David Zaffiro pulled out the best they had and helped to craft an under rated gem.” Keven Crothers (White Throne / Heaven’s Metal)

Stay tuned you won’t want to miss out on this very special 25th anniversary reissue before they are gone! Coming September 2017!
Facebook Twitter