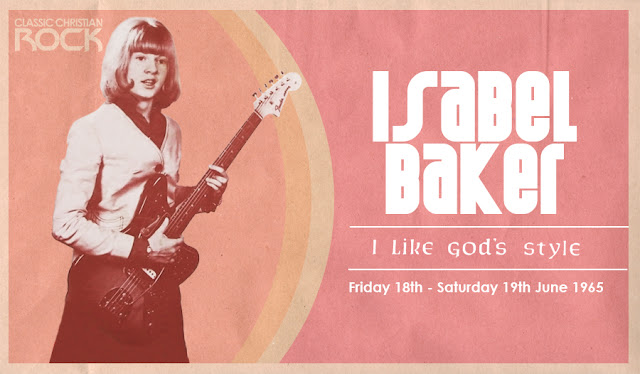 Yes, maybe you ask "Who is Isabel Baker?" "Why haven't not I heard her before?", Well, this is because she made only one album, when "Christian Rock" did not exist, in an age where playing an electric guitar was a Sin. At that time, at her young age of 16, she decided, without any fear, take a Fender guitar on her hands and mixing something of Rock and Roll, Pop, Rockabilly and Gospel, she recorded on June 18,19 of 1965 her first and only one album "I like God's Style".

In 1965 there was not CCM or Jesus Music, Isabel did not realize that she probably recorded the first Christian rock album in America, years before of Larry Norman, Mylon Lefevre or John Fisher released their albums in 1969, even before Mind Garage or Sons of Thunder, she made "I like God's Style".

And although many people may question that this album is not 100% Rock, the fact is that no Christian artist had recorded something so contemporary in America.

Isabel Baker made this album thanks to the support of her parents, who were followers on "The Challenge of Calvary Ministry" in Kansas City, her father Evangelist George Baker helped produce this album at the studios of High Fidelity Recording.

Isabel also counted on the support of Joe Utterback for the musical arrangements.

Joe Utterback remarked: "Isabel had no understanding of music and had written nothing down for the sessions. She did not know about keys, time signatures or chord names". She played her songs to the assempled studio musicians by ear. Musicians she had never met before and who worked regulary for the high fidelity recording Studios in Wichita, Kansas, where the sessions were booked by the Baker family. Also present in the studio at the time of the recordings were Isabel's parents and Joe's ife. The sessions for "I like God's Style" took two days, starting at 10 AM on Friday 18th June 1965.

The Baker family, with George Baker being an avid evangelist, was on a short "tour" around the Midwest singing and preaching wherever a church would host them.

Joe remembers Isabel as "a colorful, high energy youngster". Despite the fact Isabel had no technical knowledge of music; she was devoted recording her songs and sang effortlessly at the long sessions. "She had a big pair of lungs" as Joe remembers. "She didn't seem to tire."


The album was "produced", meaning funded and distributed, by The Challenge of Calvary Ministry incoporated in California and realeased in 1965 on the Kansas-based Romco label. The exact edition of "I Like God's Style" is unknown, with an educated guess somewhere between 100 to 500 copies and the album received very limited distribution at the time. Copies were mainly sold at church/prayers gatherings the Bakers attended by the Baker family themselves, as a souvenir for those who were fortunate enough to have seen her performing live.

Isabel's energy and songs mae an impression at everyone present at the sessions. Joe tired tracking her down several yers later but to no avail: "We Tired to find her. Even through her parents have probably passed on, Isabel should be still around". Locating Isabel has proven to be as hard as locating an original copy of her album.

Fifty years later, in 2015, the album was re-released by Harkit Records as a special vinyl signed facsimile of the Romco album with additional comprehensive notes that were not on the original release together with recording details and personnel and as a digital download.

Isabel Baker is a true pioneer of contemporary Christian music and Christian Rock. Hopefully she would have recorded more than one album. 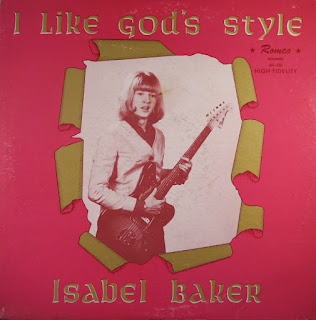