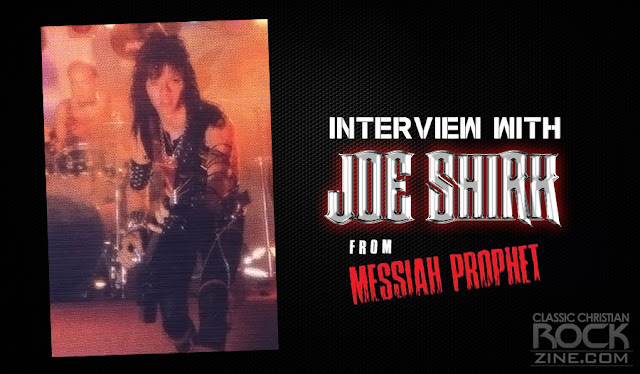 
I could say that 1986 was the first year in which the Christian metal was most widely known to the world. That with Stryper's success with THWTD, the appearance of Bloodgood, Barren Cross, Bride. Besides that some bands like Philadelphia, Saint and Messiah Prophet would continue in the new Christian metal scene, launching new records that year.

All these bands (and others) contributed and became legends that forged the Christian metal. Some of these bands are still in force, others have long since disappeared, leaving many with a desire to hear more music of them.

This is the case of Messiah Prophet, a band that was formed in the late 1970s, and released only two albums in 1984 and 1986, becoming classic albums on Christian metal, especially their second album "Master of The Metal" of 1986, considered one of the best Christian metal albums by HM magazine. It also appears in our list of the 25 best Christian rock records of 1986.

It's an honor for me to interview a former member of this, who was part of the album "Master of the Metal", without further preamble you can read the interview below.

CCR: Who am I speaking to? (For the readers)
Joe: Hi this is Joe Shirk former bassist from Messiah Prophet.

CCR: Could you tell us a little about your beginnings in music?
Joe: I grew up listening to folk and country music.  That was the the culture I was in. I started hearing bands like The Eagles and CCR and then when I was about 13 or 14 I discovered Rush and knew right then that I loved hard rock and metal.  I messed around with guitar a few years before playing bass. Mostly self taught.

CCR: What were your musical influences and why did you become interested in bass?
Joe: I think a lot of influence was from watching local bands. I really became interested in bass when I met some guys forming a christian metal band and they needed a bassist.  Lol! I really like the sound of the instrument and the drive that it could put into a song.

CCR: When was the first time you heard of the existence of "Christian Metal?
Joe: I think Rez Band would have been the first hard rock Christian music I heard.  I remember buying Stryper's first album and say Yeah! That Guitar!!

CCR: How did you become a member of Messiah Prophet?
Joe: I saw MP play a few times and the band I was in ( Rock Angel) opened for them a few times. They contacted us asking if we knew of a bassist and maybe a guitarist because their bassist was moving on to other things. Rock Angel was trying to find direction at the time several guys were just getting out of high school and we decided to retire that band and myself and another member joined MP.

CCR: How did you become the first band to sign with Pure Metal Records?
Joe: I am not sure really.  Just the timing of everything I believe.

CCR: You were part of the second and most important album of the band, one of the best Christian metal records of all time, How do you remember that moment? How was the reception of the people?
Joe: Wow,  that is quite a compliment! I think maybe we didnt really see the significance of that right away. I believe most of us were more excited about playing shows than we were about how the album might do.

CCR: What was the concert you most remember?
Joe: There were two that kind of blew me away.  One was at Cornerstone Festival were Rez Band was from. I was so honored to be playing at their festival.  The other one was at Flavo Fest in Amsterdam.  That was an outdoor show and the crowd was just so into the music.

CCR: At that time, the metal was being attacked by conservative groups, and Christian bands were not the exception. How MP did you overcome the rejection of Christians and non-Christians who did not accept this style of music?
Joe: We felt it was our call to minister the love of Christ through our music. We had a few times where people would be outside a show telling people that we were not of Christ. I think we mostly kept doing our thing and didnt worry to much about that stuff.

CCR: I read that in 1987 they were going to release an album called "Metal Messiah" What happened to this album? Could you tell us about this?

Joe: That would have been the next album with that line up of the band.  There was some preliminary work being done but that stopped when the band stopped.

CCR: In 1988  several of the members left the band, including you. What was going on in the band in 1988?
Joe: We were facing some hard financial pressure as a band and as individuals. Some of the members were moving on to college and we decided to give it a rest at that time. We had no real personal problems in the band. Also I think we didnt realise the place the band was in with the Christian metal scene.

CCR: After this, Charlie Clark and some new members worked on an album called "Living On The Edge". What do you know about this?
Joe: I really didnt know much about that work.  We all stayed in occasional contact but not very close.

CCR: "Colors", a strange album, with a very different musical style, none of the members had been on the two previous albums, I've always thought that Colors is really the only album from another band with the same name.
What was your reaction when you met this album?
Joe: Yeah,  that was my reaction to it too. You are right it was the same name but a completely different band. Our manager had the rights to the name and had put a band together under that name.

CCR: What has happened since then? Have you had communication with the rest of the band? Have you ever thought of a meeting of Messiah Prophet?
Yeah,  we all kind of went our separate ways. We have some contact now and then. We are all friends.  No enemies! I would like to say a reunion could happen, however, Charlie Clark has health struggles that make singing impossible for him.  And without that voice we could never be the real Messiah Prophet.

CCR: Could you tell us some funny or interesting anecdote in your days within Messsiah Prophet?
Joe: Oh man there are so many! Lol! Like all standing around a heater in our barn we used for rehearsal. It was so cold and we had just one heater.  Playing with frozen fingers...  But better times too. Like playing on the beach in Florida and jumping in the waves after the show.

CCR: I've seen this image from a DVD of your submission in Cornerstone 1986, Is this official?

Joe:It was actually not put out for sale.  It was an audience recording for trade only. The quality is not very good but if you would like a copy I will try to burn a copy for you.

CCR: That would be a great honor

CCR: With which band would you have liked to have shared the stage?
Joe: So many...  Not sure I could narrow down to one.

CCR: Do you think there could ever be a meeting of Messiah Prophet?
Joe: I guess I jumped ahead to this question earlier.  I think there could be except for we would be missing Charlie's vocals and with that missing MP's sound.

CCR: Do you want to leave a message for Messiah Prophet fans?
Joe:  Yes! I would say thanks for keeping this music alive all these years! Until recently I really had no idea that anyone even remembered us. I was blown away that people still listened to Master of the Metal! I am honored and also very humbled to know this. God bless you all and always follow the Love of Christ.

CCR: I want to thank you deeply for accepting this interview
Messiah Prophet Rocks
Joe: You are very welcome and thank you too.  God bless...
Facebook Twitter