Sister Rosetta Tharpe is one of the essential figures in the history of rock and roll.

If she had not been there as a model and inspiration, Elvis Presley, Little Richard, Johnny Cash, Jerry Lee Lewis and other rock originators would have had different careers. No one deserves more to be in the Rock & Roll Hall of Fame.


Without Sister Rosetta Tharpe, rock and roll would be a different music. She is the founding mother who gave rock’s founding fathers the idea...

...This is part of what can be read on the RRHOF website, which recently announced nominees for induction in 2018.

Sister Rosetta Tharpe has been nominated in the category of Interpreter. Among the nominees to be inducted in 2018 at the Rock and Roll Hall Of Fame are also:

Sister Rosetta Tharpe jumped to fame in 1938 with her song "Rock Me", becoming one of the most beloved artists in the 1940s, and an influence for artists such as Johnny Cash (who cited her as his favorite artist), Jerry Lee Lewis, Chuck Berry, Aretha Franklin, among others. In 1947, Sister Rosetta was the first person to put a 14-year-old boy named Little Richard Penniman on a stage. Since then she's been accredited as "The Godmother of Rock and Roll."

In spite of being a gospel singer, she won notoriety and stood out for her extravagant way of playing electric guitar, something never seen before in the Churches. And although Rock music did not exist at that time, she was one of the first to bring to light this sound that would revolutionize contemporary music.

The Rock and Roll Hall of Fame held its first ceremony in 1986, where artists such as Little Richard, Elvis Presley, Chuck Berry, Jerry Lee Lewis were inducted, curiously all of them influenced by Sister Rosetta Tharpe, who has been nominated 31 years after the Hall of Fame opened its doors.

You can vote for 5 of the artists nominated to the Rock and Roll Hall of Fame, through their website www.rockhall.com 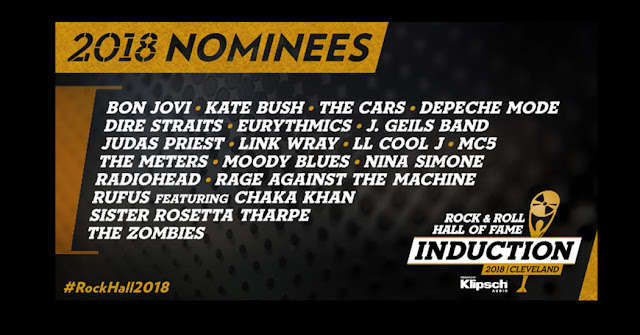