The guys in the photo are not the Power Rangers, they are the guys from FUSION, the first name of what later became known as Gardian, and soon after as Guardian.

Please note that the photographs seen in this article have been stored for many years in David Bach's archives. So it is possible that they have never been seen since they changed their name in 1985. In December 2017, David decided to post them on the official Guardian Facebook page.


Although the first album of these guys was released in 1989, the truth is that they were playing since 1982 in Los Angeles California. During that time, there were some changes in the band's alignment, as well as in the name of the group that initially was "FUSION".

And it is precisely that stage of which we know very little, in fact, the oldest photos we know of the band, are from the era "GARDIAN", which was between 1985 and 1988.

FUSION was formed in 1982 by Paul Glen Cawley in the lead voice and David Bach in the bass, shortly after, Gene Thurston joined as a guitarist and Steve Martinez, Paul's childhood friend, joined as a drummer.  The group stood out in the burgeoning Los Angeles metal music scene due to their unconventional futuristic body-armor stage outfits, whose concept Cawley derived from the biblical passage in Ephesians 6 regarding “putting on the full armor of God”.


According to David Bach, the armor suits that Fusion and Gardian used were made by Paul Cawley's brother, Reggie. Curiously, the boys kept their hair short to be different from the remains of bands of the time that were characterized by their big hairs of cotton candy. Although it seemed like a great idea, I guess it didn't work because a couple of years later, they all had big scalps.(If you can't beat them, join them.)

Wait a minute, who was James Isham?
David Bach Says: "James Isham was a great guitar player. He knew all kinds of crazy chords and brought an Andy Summers shimmer to our bizarre progressive metal sound. He later had a career in Europe as Jimmy James."

In late 1984, Isham departed, and the trio of Cawley, Bach & Hart recorded an EP of six Cawley-penned tunes called Rock In Victory. During early 1985, the band experimented with some pop textures and were temporarily joined by keyboardist Brent Jeffers and vocalist Pat Dewey, who left shortly thereafter to form a band called The Deacons. 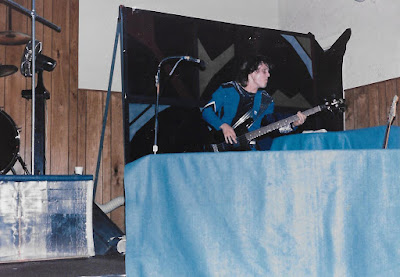 David Says: Early gigs were rough. Empty churches with only our crude production. Church folks were bewildered by our space metal sound. Weird keys and odd time signatures. Like Rush meets Hawkwind but even stranger. We slugged it out as a trio for awhile after James left. I also played Taurus pedals and synth ala Geddy--though not nearly as good.

After much searching, Cawley, Bach & Hart recruited guitarist David Caro. Caro arrived just in time for one of the first of many shifts in the band’s trajectory.

The costume with which they are seen in the previous photo, was never used live by the band, it was an armor check at their studio in Santa Ana, CA. This was the line-up that signed with Enigma Records shortly after David Caro joined the band.

The End of FUSION, the Beginning of GARDIAN
According with Paul Glenn, a close friend of Rikk Hart from high school, Erick Blair,  was working for Stryper and was out on tour with them at the same time Wes Hein, President of Enigma Records just happened to come out on the road and visit Stryper when Eric was there and basically Eric just kept bugging Wes for he listened the EP "Rock in Victory" of FUSION, and he finally did and liked what he heard, and immediately became interested in the band.

The name FUSION was changed to GARDIAN because Wes did not think it was a very marketable name. He felt lazy record people would file the records in the Jazz/Fusion section of the store being confused by the name Fusion. So they decided to come up with a new name that fit the image better. Its name GARDIAN was intentionally misspelled to fit the numerology idea of using 7 letters like Stryper.

Although, according with the website of Guardian (www.houseofguardian.com), they found out that there was already another band from Spain with the name of FUSION, and decided to change its name to GARDIAN.

The first great concert of GARDIAN was at the Whisky in Hollywood in 1985, shortly after David Caro left the band, Tony Palacios took his place, being this the Line up that would come to record the first Full-length album of the band in 1989, by that time, they already used the name of GUARDIAN. (Did they intentionally use Eight letters? lol)