Anthony Martinez 3/10/2018 02:38:00 PM
<< The Electric Liturgy is a worship service, not an entertaiment. >>
On Sunday, March 10,1968 at 2:00 p. m., an unprecedented event took place in Morgantown at Trinity Episcopal Church. When Mind Garage, a psychodelic rock band, first performed the Electric Liturgy, a worship service accompanied by psychedelic rock in the style of Jefferson Airplaine or Iron Butterfly.

The Electric Liturgy becomes a historical fact, being one of the first moments in history when a Rock band played inside a church for a worship of God, possibly had happened in England a few years ago with some Christian Beat bands, but the Electric Liturgy is possibly the first of its kind in the United States, and the first in the world with a Psychodelic Rock band. Mind Garage is possibly the first Christian band to have played a more "heavy"style, that because the earlier Christian bands had a more Rock and roll and pop style.

Only a few days before of the first Electric Liturgy, a Church bulletin announced the event in this way:

The New Sound for the New Liturgy 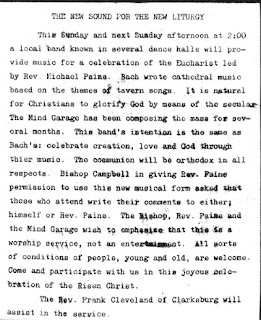 This Sunday and next sundan afternoon at 2:00 a local band know in several dance halls will provide music for a celebration of the eucharist led by Rev. Michael Paine.

Bach wrote cathedral music based on the themes of tavern songs. It is natural for christians to glorify God by means of the secular Mind Garage has been composing the mass for several months. This band's intention is the same Bach's celebrate creation, love and God through their music.
The comunion will be orthodox in all respec ts. Bishop Campbell in giving Rev.Paine permission to use this new musical form asked that those who attend write their comments to either; himself or Rev. Paine.

The Bishop, Rev. Paine and The Mind Garage wish to emphasine that this is a worship service, not an entertaiment. All sorts of conditions of people, young and old, are welcome. Come and participate with us in this joyous celebration of the risen Christ. The Rev. Frank Cleveland of Clarksburg will assits in the service.

Reverend Michael Paine had met Malcolm Boyd, also a Reverend and author who had written a book entitled "Are you Running With Me Jesus". That's when Rev. Paine got the idea to combine the Episcopal church's new Liturgy with rock music. The way Rev. Paine expressed it, "you shouldn't leave your humanity at the door" when you go to church. He wanted to bring the music of the beer halls into church in the same way Bach's tavern music had been used in church.

They wrote and premiered the Mass in Morgantown soon after, but it was almost stillborn because a photo of the band and Reverend Paine standing around a tree provoked such controversy the church father's forbade  the use of church property. But at last a place was provided by Reverend Jennings Fast of Wesley Methodist Church. That was the turning point. Once they began, it was amazing, the hatred and bigotry toward they mostly disappeared.

After the rock worship service, one fur collared woman exclaimed to her dark suited husband on the way out, "I didn't know they were like THAT!! That was BEAUTIFUL". And so it was.

Sometimes ago, in a group of Facebook, the singer of Mind Garage, Larry McLurg, sayd:
<< I can guarantee, anyone who ever say a live Electric Liturgy has never forgotten it. It changed lives.  We never charged a single penny for performing in Church even when at the same time we were signed to the largest recording company in the world, We didn't record the Electric Liturgy to make money. We never even had any plans to record it. it was an after thought. And today residuals ( royalties) still sit in an account. Its been over 40 years and we have not collected or spent a penny of it. You probably cant say that about the majority of Christian rock bands, then and now. The point is, we never played to entertain in church or for profit. It was worship, pure and simple to draw young people into church who would not ordinarily attend. Today the barriers are broken and no one bats an eye over a rock band playing in church, but not only playing in church, but an integral part of the service. It changed the way millions of people worshiped.
We took a lot of flack everywhere we went. We were bullied, threatened, assaulted, shunned, called anti Christ, communist, dirty hippies.
But it all worked out in the end :)  >>

Bruce Brown, former editor of CCM magazine sayd about the Mind Garage <<Electric Liturgy:", “At that time, there were virtually no albums available to a national audience that could remotely be described as "Christian rock;" it's impossible to overstate how radical the "Electric Liturgy" was in that context.>>

What is the Electric Liturgy?
The Electric Liturgy originated in 1967 at the suggestion of Reverend Michael Paine.
The format is based on Presbyterian, Methodist, Episcopal service books, historic Catholic Church
and Antiochian Orthodox Christian Church Liturgies.

Mind Garage: Processional, Kyrie, Gloria
The priests enter church and approach the altar to give the Greeting.
Greeting. A Call to Worship: We are here. In the name of Jesus Christ. Giver of Life. Free us.
Opening Prayer: Father God, we have gathered here to praise you. Bless our voices and our instruments, receive our worship and praise, hear our petitions, and grant us what we need. In Jesus' Name, amen.

THE SERVICE OF THE WORD
OLD TESTAMENT LESSON: Genesis 12: 1Now the LORD had said unto Abram, Get thee out of thy country, and from thy kindred, and from thy father's house, unto a land that I will shew thee: 2And I will make of thee a great nation, and I will bless thee, and make thy name great; and thou shalt be a blessing:
Mind Garage: The Song Abraham

PSALM 23:
The Lord is my shepherd, I shall not want;
He maketh me to lie down in green pastures.
He leadeth me beside still waters; He restoreth my soul.
He leadeth me in paths of righteousness for His name's sake.
Yeah though I walk through the valley of the shadow of death,
I will fear no evil; for Thou are with me;
Thy rod and Thy staff, they comfort me.
Surely goodness and mercy will follow me all the days of my life;
and I will dwell in the house of the Lord forever.

Gospel John 3:16 For God so loved the world, that he gave his only begotten Son, that whosoever believeth in him should not perish, but have everlasting life.

Nicene Creed (Modern):
We believe in one God, the Father Almighty, maker of heaven and earth, of all that is, seen and unseen.  We believe in one Lord, Jesus Christ, the only son of God, begotten of the Father, Through him all things were made.  For us and for our salvation he came down from heaven:  by the power of the Holy Spirit he became incarnate from the Virgin Mary, and was made man.  For our sake he was crucified under Pontius Pilate; he suffered death and was buried.  On the third day he rose again in accordance with the Scriptures; he ascended into heaven and is seated at the right hand of the Father.  He will come again in glory to judge the living and the dead, and his kingdom will have no end. We believe in the Holy Spirit, the Lord, the giver of life, who proceeds from the Father [and the Son]. With the Father and the Son he is worshipped and glorified.  He has spoken through the Prophets. We believe in one holy catholic and apostolic Church. We acknowledge one baptism for the forgiveness of sins. We look for the resurrection of the dead,  and the life of the world to come. AMEN.

OFFERATORY
The Peace: If you are offering your gift at the altar, and there remember that your brother has something against you, leave your gift at the altar and go; first make peace with your brother, and then come and offer your gift.
Collection: The collection is taken.
Turn to the person nearest you and shake hands and say: Peace my friend, and let that person answer: peace. In that way the peace is passed.
Do not conform to this world, but be transferred by the renewal of your mind, that you may live out what is good and acceptable and perfect in the will of God.
Mind Garage: People Get Ready
The bread and wine are brought forth.
Thanksgiving: Lift up your hearts. We give thanks; we rejoice in the glory of all creation.
On the night he was betrayed, the Lord Jesus took bread, He gave thanks, He broke it, and gave it to his disciples saying, “Take, eat; this is my body. Do this in remembrance of me.” He also took the cup, he gave thanks, and gave it to them saying, “Drink of it, all of you; this is my blood of the covenant, which is poured out for many for the forgiveness of sins.” Oh Lord, we return this gift. Accept it Father. Send down the Spirit of Life and power, glory and love, upon these people, and upon this bread and wine, that to us they may be His body and blood.
Now with all men who ever were, are, and will be, with all creation in all time, with joy we
(Psalm 150) Praise the Lord! Praise Him with harp and lyre. Praise Him with timbrel and dancing; Praise Him with stringed instruments and pipe. Praise Him with loud cymbals; Praise Him with resounding cymbals. Let everything that has breath praise the Lord.
And now in His words we are bold to say the Lord’s Prayer.
THE LORD'S PRAYER. All may sing or speak the prayer

COMMUNION:
Communion is the Creator's act through His people of binding the wounds and healing a broken humanity. Sometimes it is a party, sometimes not. But participation in it signals your desire to take on hope. Therefore all people confessing their frail humanity and yearning for a greater one are welcome to receive Holy Communion.

DISMISSAL:
Go serve the Lord, you are free. Amen.
RECESSIONAL