Anthony Martinez 4/28/2019 10:44:00 PM
One of the most important historical events in the history of Christian music occurred on April 27, 1969 when ABC televised throughout the United States the 14th electric mass starring The Mind Garage.

The Mass was held on April 13, '69 at Saint Mark's Episcopal Church in the Bowery, Manhattan, New York, however it was broadcast 15 days later on ABC for the "Directions" series, and was seen by thousands of people across the country, something never before seen on television, and rerun annually well into the 1980s. 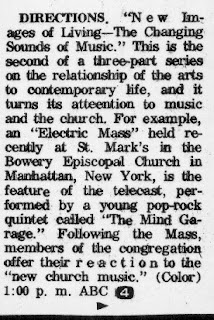 The Mind garage, was a psychedelic rock group from Morgantown, West Virginia that was initially called "The Glass Managerie" (1966), and soon after changed its name to Mind Garage, being one of the first Christian rock groups (before the term existed) in America along with The Sons of Thunder. These two groups were playing simultaneously in different parts of America, but they didn't know each other.

Although The Mind Garage is not the first Christian group to play rock music inside a church, they are the first openly known case in America, many local newspapers were writing about the Electric Liturgy of "The Mind Garage". At that time, it wasn't normal to see a group of long-haired rockers praising God in their music, and performing their show inside a church.

The Mind Garage not only played in one church, they played in many others, and without charging a penny, and although they had many detractors, there were also people who supported them and the interest in what they were doing increased more and more. They were not only a good rock band, they were original, honest, revolutionary, pioneers, brave and humble, one day before they could be sharing the stage with Iron Butterfly or Canned Heat and the other day they could be playing for free inside a church.

Beyond their detractors, the media always ended up writing positive reviews about them, and this increased the popularity of the group, which led them to be televised by ABC all over the country, this is perhaps the first time in history that a Christian rock group appeared on television while playing in a church.

Where are those videos now?
Curiously, and as is often the case, the band never obtained copies of these films, but it is obvious that ABC must have the videos of the Electric Liturgies made by The Mind Garage on file.

On December 8, 2011, while talking with Larry McCLurg, singer of the band, I asked him about these videos, Larry said:

"  Disney has the videos in a vault in England and has not released them.
We need to find the original producer, and he is probably dead.
Only he can release the videos to us. "


Although I don't find the relationship between Disney and ABC or NBC, it is indisputable that this material is in good hands, unfortunately, it is very likely that it will never be published, so there is not much to be happy about.

But not everything is lost, the band has a small video of 1:30 minutes of this transmission, this can be seen below, being the first time it is available on the Internet.