After some time of inactivity, the band WORLDVIEW, returned to the stages with some big surprises. This is the incorporation of former Barren Cross singer Michael Drive Lee (better known as Mike Lee) and former Holy Soldier drummer Terry (The Animal) Russel, who take the place of two other legends, Rey Parra (Sacred Warrior) and Glen Mancaruso (Die Happy, Once Dead, Vengeance Rising) respectively.

In an interview to the Pure Metal Fan site, George Rene Ocha, leader of the band said:

" The second WORLDVIEW record will have Terry Russell on drums. Terry used to play with Holy Soldier. Terry is a phenomenal drummer. I’ve already gotten to play and hang out with him quite a bit. He fits in with WORLDVIEW like a glove. Terry is a good family man, committed Christian, just an all-around good guy. He loves playing double kick and we give him a lot of those opportunities.

We also have a new vocalist and his name is—none other than Michael Drive Lee formally of Barren Cross. He will be our front man/lead vocalist. We’ve already written 10 songs together and its really good stuff. As it happens with any band that switches vocalists, the band will evolve a bit. We will still have some more first album kind of flavors in there, but the new record won’t be The Chosen Few part two.

It will definitely be an evolved WORLDVIEW with Mike Drive Lee at the helm singing. Mike isn’t one of those operatic type singers like Rey Parra. Mike is more of a gutsy, classic metal singer. It’s like comparing Geoff Tate to Bruce Dickinson. Mike doesn’t like to be compared to Bruce because he has gotten away from that type of singing. Mike has found his own niche in a lot of ways. I really look forward to Mike’s input in WORLDVIEW. We work and write well together. Mike is going to be a huge asset to WORLDVIEW. " 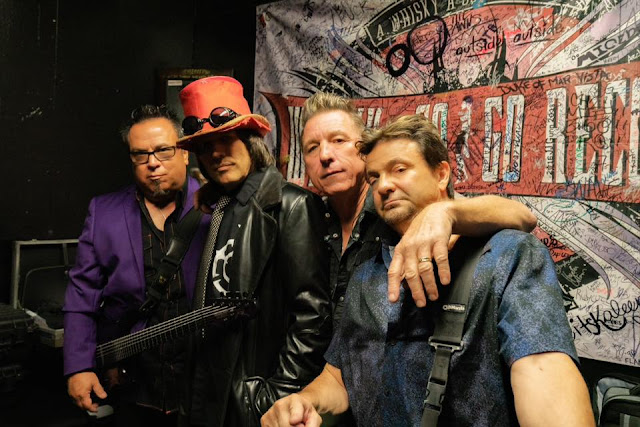 Last October 10th, the band presented itself for the first time with its new lineup in Whiskey A Go Go in West Hollywood, CA. as an opening band to Stryper.

This concert was the return for Mike Lee, who for several years has been away from the music scene since his last performance with Barren Cross in Europe in 2012.
Michael said on his facebook account: "With our combined writing styles and inspirations, the raw music that has been birthed through this is so very good, I cannot wait for you to hear it; and the sound quality that we’re getting in the studio is amazing, too!
I realize that this has been a long time coming, and I appreciate your patience with me. I know that I’ve been laying low and keeping a low profile but that’s going to change (don’t tell anybody…) " - Welcome Back Mike.

Nobody can discuss it, this lineup is really exciting, I can't wait for the second album to arrive, if the first one was great, imagine what's coming.

Genetic Dysfunction, Mystery Babylon and Lying Whispers, are some of the new songs that will be on the second album of Worldview and that they played for the first time in the mentioned concert. You can see part of the Worldview show below: