Anthony Martinez 7/17/2020 06:19:00 PM
As far as classical metal bands are concerned, Tourniquet is undoubtedly one of the most active Christian bands today, this despite not having a complete lineup, they continue to release albums and do live performances with guest musicians. When Tourniquet announces a new album, everyone pays attention. Not surprisingly, Tourniquet's latest albums have been very well received by the fans.


Recently, Ted Kirkpatrick, announced the launch of "THE SLOW COSMIC VOYAGE TO WISDOM" A 72 minute collection of crushing doom – remastered for maximum effect, featuring the dramatic cover art by Derek Sheyer. First 100 signed and numbered by Ted in vertical black area to the left of front cover.

Ted Says: Due to the popularity of the recent “EPIC TRACKS” release, and while we’re preparing the next full length Tourniquet album (which promises to be crazy) for 2021, we’re releasing this crushing CD featuring the slow doomy tracks and cover art by artist Derek Sheyer. The release includes a new 25 minute ultra-heavy atmospheric “drone” track, a first for the entire Christian industry.

The album will be released on September 1st, and you can preorder here: https://tourniquet.net/product/tourniquet-the-slow-cosmic-voyage-to-wisdom-cd-preorder/ 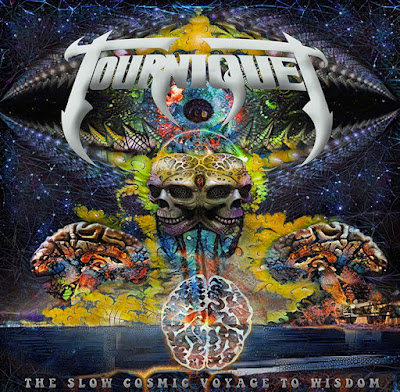