This is why on Friday and Saturday, July 10th and 11th, Pastor Wildman and I attended the Kingdom Come Festival in Greentown, Indiana.  Not one of the bands that played was a Classic Christian Rock band, but they were following in the path blazed by the CCR bands of the 1970s and 1980s.  In other words, along with Petra, Bloodgood, Stryper, and all the others, these up-and-coming bands used hard rock and heavy metal to proclaim the gospel of Jesus Christ. 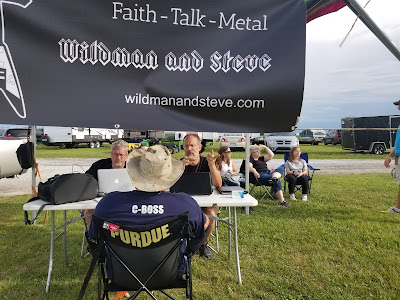 Wildman and I set up a tent with the help of Billy and Sarah Pross of Sweet Fun Concessions and were soon busy interviewing fans and bands throughout the weekend.  We came away convinced that the legacy of sharing Jesus through awesome and LOUD music is alive and well in the 21st century! 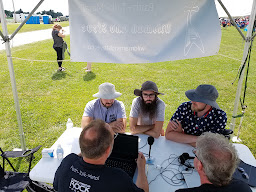 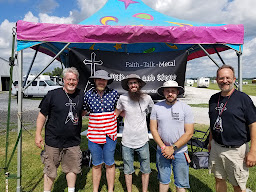 First up we have Poetic Descent.  Jared Lacey (vocals/guitar), Jason Elam (guitar), and Adam Thompson (drums) make up this alternative metal band from Dayton, Ohio.  Their sound has been compared with bands like Incubus, Deftones, Disciple, Red Jumpsuit Apparatus, Dead Poetic, and Funeral For a Friend.

Wildman:  I was impressed with these guys- not only as musicians but as ministers.  They described what they do as a ministry.  When I asked Jared where the name for the band came from, he quickly explained that Jared in the Hebrew means to descend- thus his desire is to write songs with a deep meaning- he definitely does that!

Steve:  Jared was one of the artists who would rather talk about Jesus than his music.  Make no mistake, he cares very deeply about what he and his band produce, but it is all in the name of his Savior.  It was refreshing to hear this from a young artist who was literally dripping sweat from his prodigious beard after giving it his all on stage. 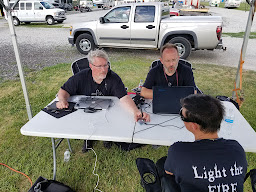 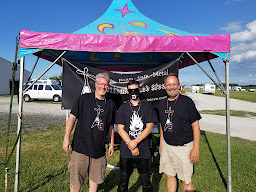 Aaron Ray is a Christian rap artist from Oklahoma.  Now, before anyone starts saying that rap has no business with rock, Aaron released a song last year with Zahna, which you can find here.

Wildman:  Aaron Ray has ALOT of energy- which can be noticed on stage as well as in this interview. He has a natural excitement to everything he does.  It was very encouraging to hear him share his excitement for music AND for Jesus.  Hip Hop is not my favorite Genre.  But, after interviewing Aaron, I just may consider- which should tell you how impressive this man is!

Steve:  It is important to note that just because we interview an artist or promote his or her work, it does not necessarily mean it is our own cup of tea musically.  I do not particularly enjoy rap, but I do recognize when it is done well and why it, like rock and metal, can be a great vehicle for sharing the Christian faith.  It is a no-holds-barred style of music, and that alone wins it my respect.  On top of that, Aaron is a true musician in that he is experimenting and pushing the boundaries of his art by working with musicians outside his chosen genre.  Hats off to this young man and the work he is doing for the Kingdom! 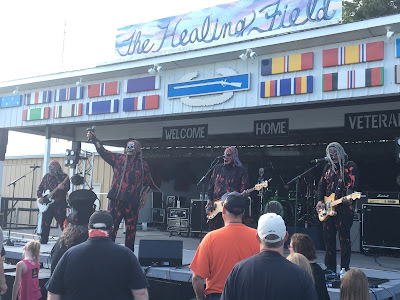 Interviewing Wretched, lead singer of Grave Robber, was one of the most interesting experiences in the history of Classic Christian Rock Podcast!  The band is described as American horror punk, and they hail from Fort Wayne, Indiana.  With the likes of Alice Cooper, KISS, and The Misfits inspiring their musical style and stage production, they certainly grab your attention as they sing about the Reanimator, Jesus Christ.

Wildman:  The most encouraging part of interviewing Wretched was the common ground we have in both of us being HUGE Petra fans.  When asked about the origin of the band name- he wasted no time revealing it was from Petras classic "Grave Robber" from 1984.  He went on to explain that the Reanimator (Jesus) is the only GRAVE ROBBER.  Grave Robber is a great band with a great message.

Steve:  Wretched asked that we not take pictures during our interview since he had already changed out of his stage makeup and costume.  During the interview itself, he maintained his stage voice, although when not on the record he spoke normally.  As someone who has done work in historical reenactment, I respected that.  A lot of work goes into creating a character on stage, and one of the cardinal rules is that you don't kill the character by suddenly revealing yourself to the audience.  This dedication to the performance shows how committed the band is to its work, which is ultimately to proclaim Jesus Christ. 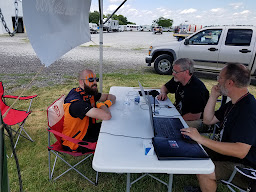 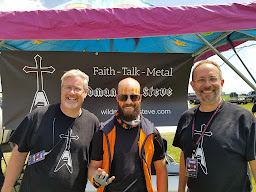 Josiah Brand, a.k.a. Firebrand, sat down with us and shared his mission and his music.  He comes from Southwestern Kentucky and combines modern metalcore with electronica to produce songs that range from somber and melodic to heavy and driving.

Wildman:  I loved how Firebrand described his sound, "Combined the elements of electronic music and rock and metal.....depending on mood it could really be upbeat or it could be really dark and down tempo."    This expresses a musician who isn't locked in to only one way of writing- but is flexible to do what the song requires.  I appreciate this as it matches up with the Scriptures- some dark, some uplifting.  Firebrand is doing is part to convey the entire experience of Christianity.

Steve:  Josiah impressed me as a musician ready to do what it takes get his music out to the world.  He approached us and was eager to share his story.  Much like a father who is excited to show his new baby to the world, Josiah radiated that same kind of enthusiasm.  He has what it takes to be successful in honoring Jesus through music.  It is no wonder that he calls himself Firebrand! 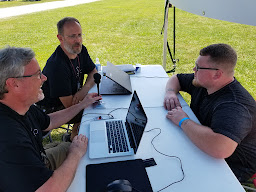 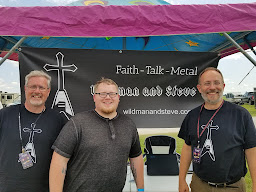 We were fortunate to get to talk with Casey Price, lead singer of Forsaken Hero, a band that has opened for Stryper during their Fallen tour.  Their music falls in the CCM category, and it was clear that sharing Jesus was their goal.

Wildman:  Casey is someone seeking only the direction of Christ.  His goal is to do the music people are listening to to gain their ear so his music is able to minister to them.  I appreciate his willingness to change based on who is listening.  Just like the apostle Paul, "he is endeavoring to become all things to all men that he might save some."

Steve:  Casey is another one of those artists who is in it for Jesus!  He is passionate, hungry, and throws himself fully into his music.  Even though he has moved away from pure metal, his music is all about glorifying God and is worth checking out. 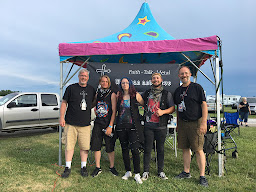 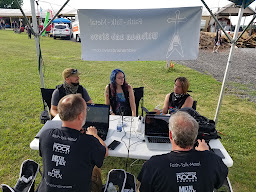 Reclaim the Day lead vocalist Rebecca Sugg, along with her husband and guitarist Marcus Sugg and
bassist Logan Morehouse, caught up with us to share their work in Christian Rock Worship.  Coming from Greenwood, IN, they brought undeniable passion to their calling to praise Jesus through rock.

Wildman:  When we asked Reclaim the Day to describe their style.  The first word was "Worship".  I really appreciated this thought.  They are a good reminder that ALL styles of music regardless of genre- if done for God is worship to Him.  With this focus they can't go wrong.

Steve:  Wildman stole the question I wanted to ask Rebecca in our interview.  As a vocalist, I was interested in how she supported her voice while screaming.  She was talked about her vocal lessons, which is something many people may not consider when listening to their favorite musicians. 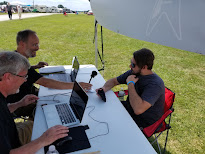 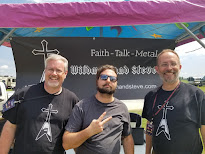 Brian Boyd, lead singer for Amongst The Giants, a metalcore band from South Florida, spent some time with us.  He said the band's name came from the fact they were performing with giants of the Christian rock scene, but it is clear that ATG is already taking their rightful place among towering acts of Christian metal.

Wildman:  I asked Brian after his set to come over for an interview.  He was polite as he could be because in the moment, he was obviously exhausted.  This demonstrates a musician who gives his all on  stage.  During the interview we found out that it isn't for performance, he gives his all so others could be touched by the music he offers- Great Goal!

Steve:  Brian is a great example of humility.  His band is named Amongst The Giants because that is how he sees himself when working with some of the great rock and metal artists.  I am pretty sure ATG will soon become one of those giants themselves. 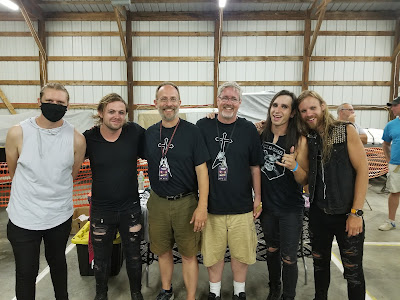 We didn't interview our good friends Chaotic Resemblance during the festival for two reasons.  First, we had recently spoken with them for an episode of Classic Christian Rock Podcast.  Second, we would have waited all day to get the chance.  These guys are INSANELY popular, and for good reason.  Their music will blow you across the field, and their unabashed proclamation of the gospel in word and song is among the boldest we have ever heard.  Here's a little taste of their set... 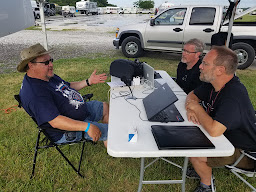 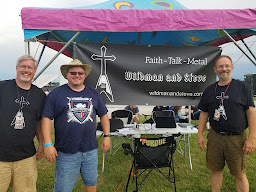 Last, but not least, we have to acknowledge one of the guys who made Kingdom Come Festival a reality, Chris Bousum.  Chris has a heart for Jesus and a passion to see people connect with Him through the best rock and metal music around.

Wildman:  Christ mentioned how many who attend festivals like this don't fit in elsewhere.  He explained that he knew what that was like because he was an outcast himself.  He has kept this festival going to minister to those who aren't accepted in other venues (High Schoo, Youth Group, etc.). This is the perfect picture of a ministry dedicated to Jesus.  The outcasts were always found flocking to Him!

Steve:  Chris is a man with a vision and a passion.  His passion is for Jesus, and his vision is to pick up where Cornerstone left off.  As he told us how Kingdom Come Festival came to be and has developed over the years, I could not help but be impressed.  This is a popular and growing festival with a full decade behind it.  Metal and rock fans need to check it out next year and spread the word.  I was also quite impressed with how Chris and the team pick the bands.  Their choices are not just based on musical chops, but on the walk and witness of the artists, and that is what makes KCF stand out.