A friend of mine and brother in both Christ and rock, apologist Mark Mittelberg once told me that when heavy metal fans grow up, they become prog fans.  Well, I've more than grown up and I still love metal, although I have come to enjoy prog rock as well, especially when it comes with some metal woven in.  Enter Sola Scriptura by Neal Morse. 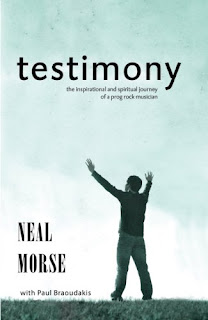 If you want to know more about Neal's story, read Testimony, the biography he wrote with Mark's and my mutual friend Paul Braoudakis.  After deciding to follow Jesus Christ, this "Stevie Wonder of Prog" began making music inspired by his newly found faith, which takes us to Sola Scriptura, his 2007 album about the life of Martin Luther.

Although Morse does not describe it as an opera, it could easily be that.  Its flights of musical creativity, its lyrics that at times cross over into sung dialogue, and its unified story are the stuff of theatre.  I had listened to bits of it, but only recently sat down to enjoy it from start to finish, and I am glad I did.  It is a rich experience for any Christian who is a fan of great music, experimental music, prog music, and metal.

The album is divided into four tracks, the first two and the last of which each contain six pieces.  Track 1, coming in at just over twenty-nine minutes, is called "The Door" and opens with an instrumental introduction that says prog and musical theatre at the same time.  It is fast, bordering on aggressive at times and at others opening into expansive passages, and I could easily see myself in a theatre as this music played while waiting for the curtains to open.  The introduction gives way to the second part of this track, titled "In The Name of God."  This piece is pure musical theatre and draws heavily on Scripture, especially Revelation, for its lyrical content and inspiration.  I say it is pure musical theatre, but at the 7:52 mark, we get our first, sustained metal passage, with delightful organ noodling that thrills this Jon Lord fan.

"In The Name of God" sets up the abuses of the Roman Catholic church of Luther's day and leads to Luther's declaration in the next piece, called "All I Ask For."  This is a light number, and by that I mean it seems filled with the light of a summer day streaming across a rolling field.  It could easily be a stand-alone piece, and with its synthesizer-drenched sound would have been right at home in the mid-1980s.  Lyrically, it is one of my favorite numbers on the album, and expressing Luther's desire to be with God and to live solely for him captures how I feel most of the time.

A dark, metal feel with wailing guitar suddenly interrupts the sunny moment of "All I Ask For" as we head into the next part, "Mercy For Sale."  Here we are back to musical theatre with sung dialogue describing the sale of indulgences.  Once again, Revelation and other parts of the Bible, as well as history, inform the lyrics. 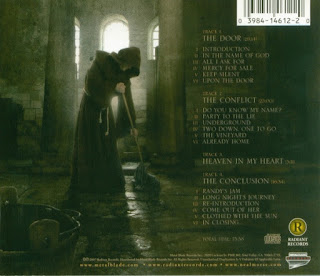 An upbeat, prog feel and more tasty guitar soloing follow, only to slow into a funky, guitar-anchored intro into "Keep Silent."  This depicts Luther wrestling with the call he senses to speak out against church abuses.  It, too, could be a stand-alone song and has a powerful message for each of us independent of its context regarding Luther.  The guitar work would fit within in any classic rock song, and the keyboard funk evokes the great feeling of '70s rock.

"Upon The Door" closes the first track, alternating between a third person and first person look at Luther's decision to nail his famous ninety-five theses to the door of the church in Wittenburg.  This is a wispy, moody number that again calls to mind rock from the 1970s and then opens into a guitar solo worthy of any hair metal band from the '80s. 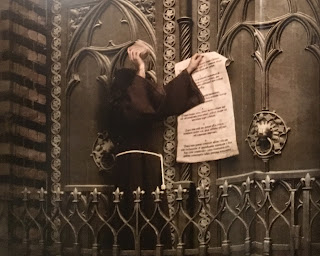 Track 2, "The Conflict," opens with its first piece, a hard, dark, metal composition called "Do You Know My Name?"  I have no evidence that Morse listens to Stryper, but this number would have fit nicely on that band's 2005 release Reborn.

For all its metallic opening, "Do You Know...?" turns prog as it transitions into "Party To The Lie," which has a distinctly Pink Floyd atmosphere.  It details the growing conflict between Luther and church leaders, and while the lyrics are clearly about a specific moment in history, this is yet another song that speaks to individual listeners today.

This is an important reference to Luther's translation of the Bible from the Greek and Hebrew original texts so the people would have it in their native German rather than in the Vulgate Latin.  In a world of Internet Bible resources in just about every language, and with some languages boasting multiple versions of the Bible, we easily forget the importance of first having Scripture in the common language of the people.

A soft, beautiful, acoustic guitar solo comes next, and its Spanish flair takes us into "Two Down, One To Go," which includes a wonderful piano number that makes you realize, if you haven't already, just what a musical master Morse really is.

Metal and Deep Purplesque organ come roaring up next for "The Vineyard."  A verbal battle ensues as a voice speaking for the church calls Luther a wild boar, and Luther responds by calling the church Babylon the destroyer. 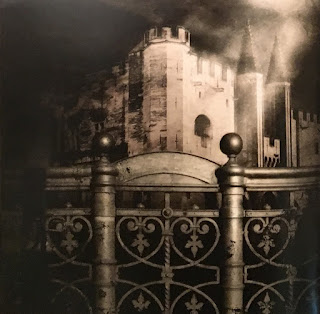 The breathless pace of "The Vineyard" gives way to a beautiful number called "Already Home."  Reminiscent of Carlos Santana, soft '70s rock, and even contemporary praise music, it captures Luther's vision of heaven in the midst of his suffering.  Full of biblical promise, it becomes a song of encouragement for all of us, with an absolutely gorgeous guitar solo.

After twenty-five minutes of "The Conflict," Morse takes us into Track 3, which contains only one song, "Heaven In My Heart."  At just a little over five minutes, it opens with a delicate piano intro and becomes the type of ballad soaring into an anthem we all loved in the '80s.  Lyrically, it captures Luther's focus on Jesus in the midst of his suffering and is grounded in the promise of God to be with us in times of trouble.

We enter the final part of the album with Track 4, "The Conclusion," which begins with "Randy's Jam," a frenetic, drum-driven, prog piece that then opens up into "Long Night's Journey."  This is a Queen-like number whose lyrics are taken almost directly from the Book of Revelation.

From there we get the next drum-heavy instrumental piece called "Re-Introduction," which crescendos into a bit of funk as it energetically launches us into "Come Out of Her."  Here we move from the story of Martin Luther to an impassioned cry by Morse himself inviting people to a life in Christ based on Scripture and not ritual.

A triumphal transition leads into "Clothed With The Sun."  It is a glorious, musical picture of the church, the body of Christ, radiant and united with her Lord.  It is the sort of piece you would expect at the end of musical theatre, clearly drawing the audience into an uplifting, light-drenched conclusion, accented by powerful guitar and keyboard solos.

The final fifty-nine seconds fade out with a the softest accompaniment as Morse sings,

This is a worthy piece for any metal fan or prog fan to have in the collection, but it is nearly a must-own for any Christian seeking to be drawn ever closer to the Lord.