On Saturday, the 29th of October, in 2016, I arrived at the venue and did not sit down for nine and a half hours.  When I finally collapsed into my car to drive home, I was lightheaded from mild dehydration, my ears were ringing, and my head was pounding.  It had been the best concert experience of my life, and you are about to share it through words, pictures, and of course, videos! 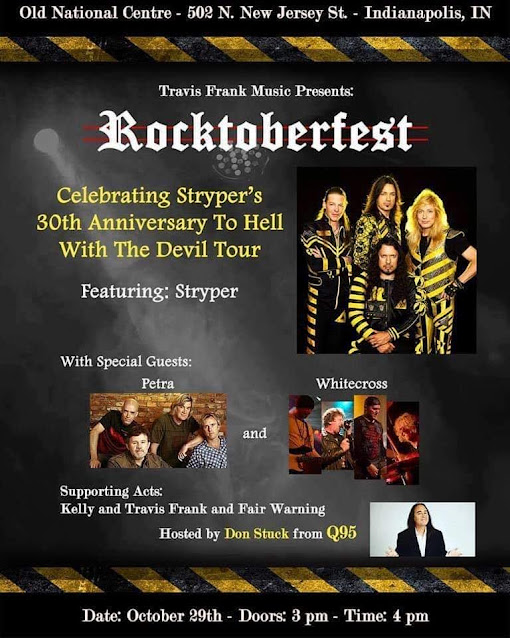 Stryper was on the 30th Anniversary To Hell With The Devil tour, playing the album from start to finish and wearing the costumes they had worn back in 1986, but what made an already once-in-a-lifetime opportunity even more special was that for the Indianapolis stop of their tour, they would be headlining Rocktoberfest with Petra, Whitecross, and multiple opening bands.  It was general admission, so I got to the Old National Centre early and enjoyed the fall weather as fans began queueing up. 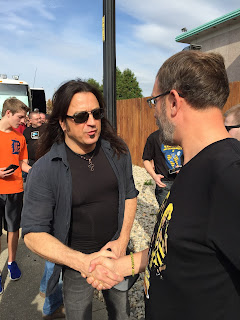 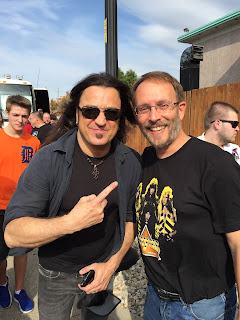 The first time I met Michael Sweet was when he came out to greet fans before a Stryper concert in Illinois, and he did it again that afternoon.  He's just that kind of guy.  He loves hanging out with fans, and getting to meet him again was an honor and so much fun.  It added to the electricity already building among the crowd outside the theatre, electricity that would explode when the doors were flung open.

I felt like a teen back in the '80s.  A good friend was going to meet me, but at that moment I was alone, so I rushed past the merch tables as soon as they took my ticket and headed for the concert hall. I was determined to be up front, and I was.  I staked out my position just to the right of center stage and never left it.

My only regret is that I did not take more pictures and video of the opening acts.  Back then I had to save memory and battery on my phone.  There was Cool Hip Priest (with guys from Rok Hollywood), Chaotic Resemblance, Todd Moyer Band, and K & T Frank (a.k.a. Holy Fire).

Kelly Frank, who made this amazing Christian rock fest happen, has since become a friend, and I wish I had known him at the time.  He has gone on to do incredible things, even putting out a song "Fool Runnin'" featuring John Schlitt (Petra), John Lawry (Petra), and Rex Carroll (Whitecross/King James).

Chaotic Resemblance, however, just blew me away.  Travis McConnell and L.A. Ellis are as on fire for Jesus as their music is just plain on fire.  With sounds reminiscent of Skid Row, they made it clear that night that Christian metal was not just a thing of the past.  I have been fortunate since then to interview them twice, first by myself and then on The Wildman & Steve Show.

After the opening acts had battered our senses musically, the full sonic assault began when Petra took the stage.  These guys are one of the foundational bands of Christian hard rock and metal.

Petra highlights
Many of us remember the days of arena rock, and I love it, but in a medium sized venue of just over 2,000, you get all the power right in your face.
Barely had Petra left the stage when Whitecross came on.  I had met Michael Feighan (drums) and Benny Ramos (bass) a few years before when they, Rex Carroll, and Jimi Bennett played as King James, so I was really excited when Michael walked across the stage to set up his drums.  Since I was as close to the stage you could get, I let out a huge, "M I C H A E L!" causing him to look my way and smile.

This band simply tears it up!  Whitecross, whether live or on record, brings to life all that fans of class '80s metal love.  There is the blistering guitar, soaring vocals, and the hard-driving foundation of drums and bass. 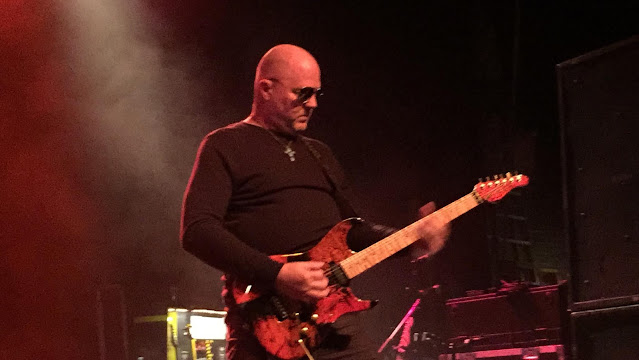 The maestro behind the shades, Brother Rex

As I said, I had met Michael a few years before, so when the band left the stage, he tossed me one of his drumsticks.  Do you remember what it was like to be a child on Christmas morning?  That was me at that moment, and it only got better when, at the end of the night, I ran into Michael in the lobby and he autographed the stick as well. 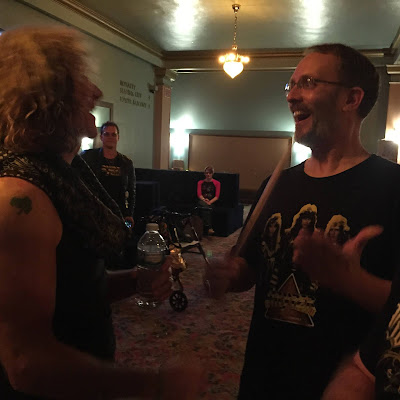 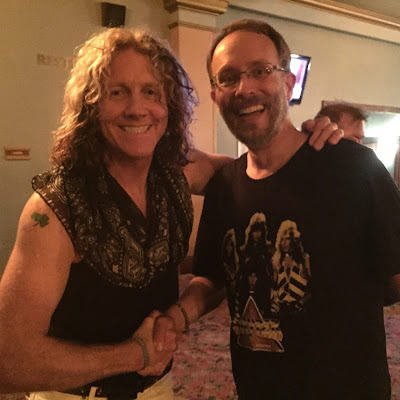 Like Petra, Whitecross is a phenomenal live act, and the guys did not disappoint that night.  Here are some highlights along with an extra special video of Michael's amazing drum solo.
Whitecross highlights
Michael Feighan drum solo
Somewhere in all this, my friend had arrived and, incredibly, had worked his way to the front to join me.  Let's be clear about something.  I have taught Latin for thirty years at the high school and university levels, and my friend, Dr. Brad Oliver, is a professor of education and at the time of this concert was on the State School Board for Indiana.  It just shows that people from all walks of life love hard rock and metal, especially when it screams for the King of kings and Lord of lords, Jesus Christ.
By this point in the night, I was getting concerned.  I could hardly stand from exhaustion and the beginnings of dehydration...hey, I'm a middle aged Latin teacher...and was worried I might not have enough voice to scream along with the final act of the night, Stryper.  Oh, well.  I dug into some deep reserve of metal and threw myself into the moment we had all been waiting for, To Hell With The Devil performed in its entirety by the original members of Stryper.
The theatre went dark, the opening notes of "The Abyss" rumbled through the speakers, and I was back in 1986 heaven.  The audience screamed as the silhouetted figures of the band members took the stage, and then everything exploded in light as Stryper told the devil where he could go. 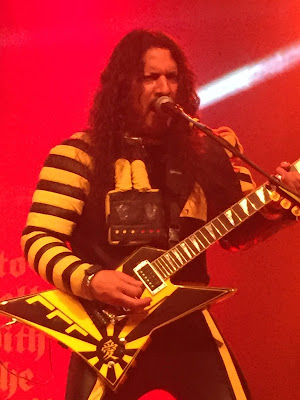 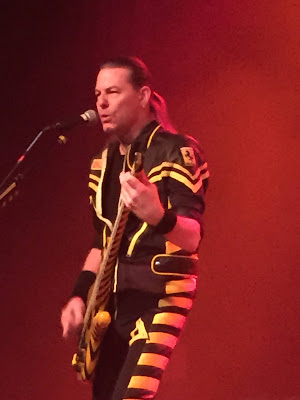 The guys may be in their fifties, but they gave it it their all and left everything on stage, and if you think it is just a metaphor to say they were on fire, then check out what has become my all-time favorite photograph of Oz Fox! 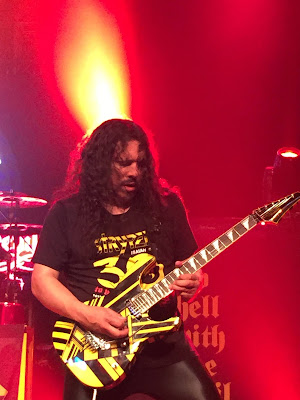 As I made my way out at the end of the show, there was one last special moment for me.  I ran into one of my former students!  Brandon Signorino is now the guitarist for Lavaborne and was there to see Stryper for the first time.  Thirty years before, I was a high school student listening to To Hell With The Devil, and now here I was three decades later seeing the original band play that album and getting to enjoy it with one of my own former high school students.  It was without a doubt the best nine and half hours of metal! 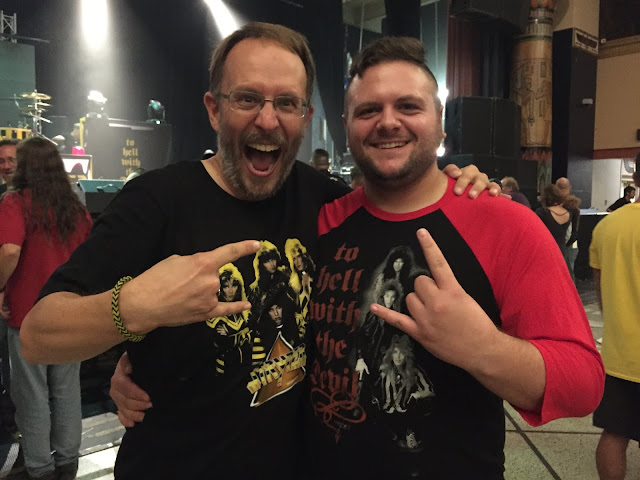